Coronavirus may keep 3rd-party presidential candidates off the ballot 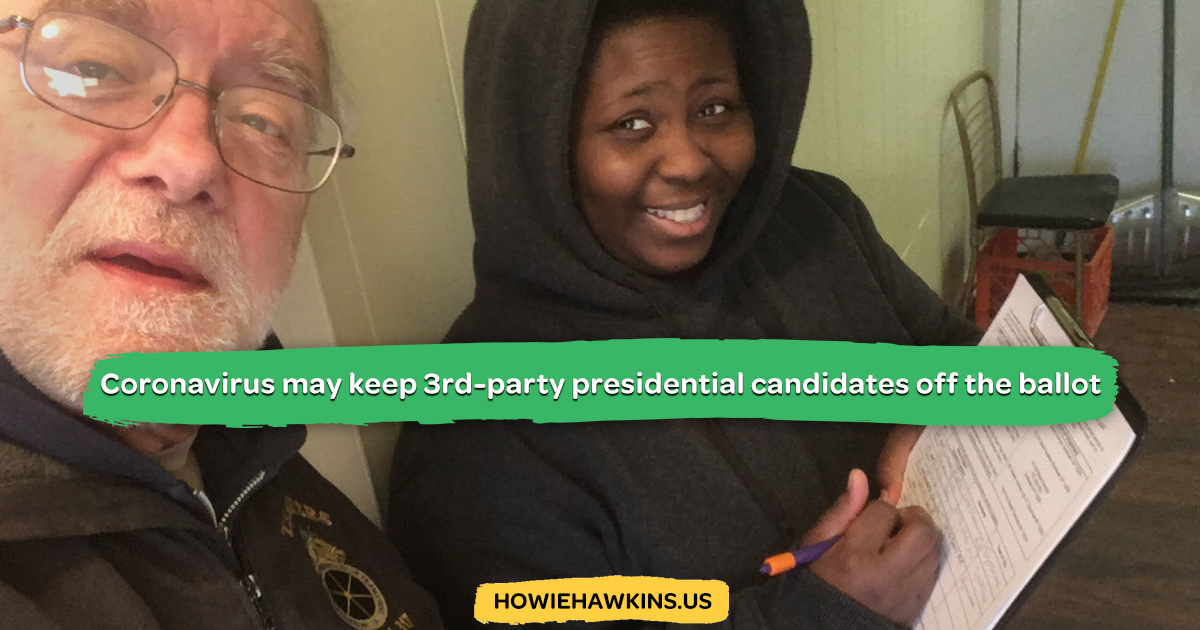 Third-party candidates may be off the ballot this November unless petitioning requirements are relaxed, Green Party candidate Howie Hawkins told Yahoo News on Wednesday.

Hawkins said on the Yahoo News podcast “Skullduggery” that the Green Party may be unable to get on the ballot in as many as 30 states — including Illinois, Ohio, Wisconsin and Pennsylvania — due to state laws requiring third parties to collect thousands of signatures on ballots to qualify. Hawkins said it will be impossible to meet these requirements in light of White House guidelines urging citizens to stay at home and avoid social gatherings.

Green Party lawyers are now asking state officials to grant them relief, arguing that depriving voters of the chance to cast ballots for their candidates will be a blow to American democracy.

“We’re going to have a third party on the left — that would be our base — and we’re in this race to raise issues that are concerns for” voters on the left, Hawkins said. “Those issues will not be debated in the general election unless the Green Party is in the race, so I think those are good reasons to have a real democracy and let people make their choices.”

Hawkins still needs to fulfill ballot eligibility requirements in about 30 states, he said. He said, however, that his lawyers’ outreach to state officials has only just begun. He is asking to be allowed on state ballots without obtaining the estimated additional 1.5 million signatures required for him to run everywhere.

Stein had attended a gala dinner with Russian President Vladimir Putin during a 2015 visit to Moscow and was seated at his table. A photo of Stein and Putin at the dinner surfaced in 2017, leading to accusations that Stein was a “Russian asset” positioned by Putin to help Trump win.

Hawkins rejected the claim, telling Skullduggery hosts Daniel Klaidman and Michael Isikoff that Stein stood up to the Russians.

“She was challenging Putin on issues like the Arctic … [and] an arms embargo on Syria,” Hawkins said. “If she was supposed to toe the Russian line as a Russian asset, she didn’t get the memo.”

Stein’s relative success in 2016 benefits Hawkins now because he said about 40 states at least partially evaluate third-party nominees’ claims to join the ballot based on how well the party performed in the last election. The Green Party was on the ballot in 45 states and an “official write-in” in three additional states in 2016.

A retired Teamster based in Syracuse, N.Y., Hawkins is a former construction worker and UPS employee who relies on a couple of pensions for income. He told the New York Times in late 2018 that the payments amounted to about $1,260 a month, placing him near the poverty line.

Hawkins said that with about a half-million offices up for election across the U.S. this year, he hopes the Green Party can build local and grassroots support to “create a real base.” Excluding third-party voices will suppress that base building effort and impact policy, Hawkins said, pointing to his belief that New York Gov. Andrew Cuomo engaged more on Green Party policy priorities after Hawkins won close to 2 percent of votes in the 2018 New York state governor’s race.

“Vote for what you want and make the politicians come to you,” Hawkins said. “You don't have to win the office to have leverage in the political system.”

Still, Hawkins acknowledges that leverage will be harder to come by this year since the ballot petitioning process is complex and varies substantially across the 51 jurisdictions that will vote in November. Typically, states require thousands of physical signatures which can only be collected in person for third-party ballot access, though Hawkins hopes some will consider electronic signatures in light of the current pandemic.

“This country is off the charts compared to other electoral democracies around the world in how hard it is to get on the ballot,” Hawkins said. “We’ve never had support from the Democrats on ballot access.”

Hawkins said he’s no spoiler and called the coronavirus “Trump’s Katrina,” before adding that the November election is the Democrats to lose.

“They have the megaphone,” he said, emphasizing that his campaign is most focused on reaching alienated working-class and minority voters who have largely disengaged from politics.

He implored potential voters who agree with his left-wing platform to vote for it, batting away suggestions that his candidacy could lead to a Trump victory.

“The idea is to build the Green Party from the bottom up,” Hawkins said. “If you’re a progressive or a socialist and you vote for Joe Biden, they don't know whether you’re a Sanders socialist or a Biden centrist. ... You get lost in the sauce and the left disappears.”