Listen, Biden! COVID-19 and Medicare for All 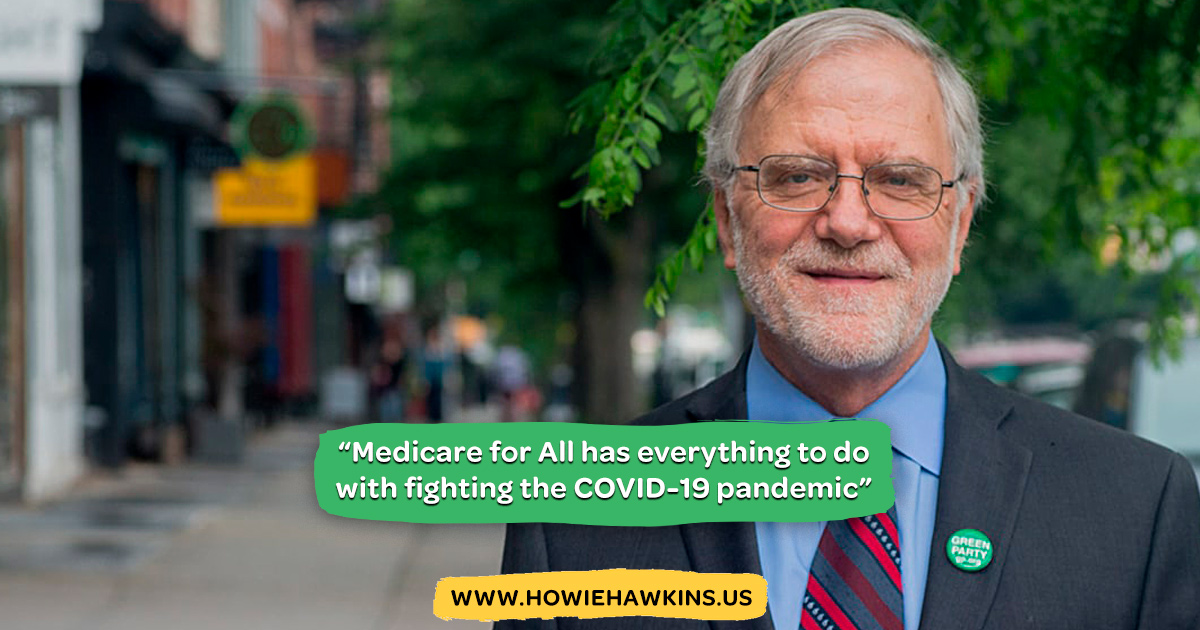 On the topic of the COVID-19 pandemic in Sunday's Biden-Sanders debate, Joe Biden said, "…you have a single-payer system in Italy — it doesn't work there. It has nothing to do with Medicare for All. That would not solve the problem at all."

Medicare for All has everything to do with fighting the COVID-19 pandemic. Joe Biden has no idea what he is talking about. He only knows his anti-socialist dogma.

Italy's single-payer National Health Service is far better than the profit-driven US system in dealing with the COVID-19 pandemic because every Italian can go to the doctor free of charge to get tested and, if need be, treated.

That is far from the case in the US, where 87 million people are uninsured or so underinsured that they avoid visiting a doctor because they cannot afford the high deductibles and co-pays. That means many people in the US infected with COVID-19 are not going the doctor and are going around infecting others because they are not insured or cannot afford testing and treatment with the crappy insurance they have. The profit-driven US system is farther short of test kits, respirators, and hospital beds than single-payer Italy.

Italy's universal single-payer system is a better model for public health protection in pandemics than the U.S. mixed public-private system that leaves a third of the population without affordable access to the health care system. The World Health Organization ranks Italy's healthcare system the second best performing in the world, after France's. The US healthcare system ranks 37th. It is no surprise, therefore, that Italy's life expectancy is 83.4 years, the fifth highest in the world, while the US life expectancy of 79.8 years ranks 37th.

The single-payer system in Italy is a National Health Service, where hospitals and clinics are publicly owned and doctors are salaried public servants. It is fully socialized medicine: publicly owned, publicly administered, and publicly delivered. The system is paid for through a progressive payroll tax. The US proposal for Medicare for All is a National Health Insurance system where the single public payer pays for the costs of health care, but the health care facilities and the delivery of health care are mostly private.

It is not Italy's public healthcare system that is failing. It is being overwhelmed by an exponential explosion of COVID-19 cases that has left the system with a shortfall in hospital beds and respirators. The public system did not cause these shortages. The tsunami of infections from this novel virus did.

But the Italian shortages have been made worse by conservative reforms in 1997 that introduced elements prevalent in the US health care system—elements that Joe Biden wants to preserve. Those reforms introduced competition between public and private hospitals in the name of incentivizing efficiency. This "free market" competition enabled more affluent people to buy private insurance or pay out-of-pocket in order to jump to the front of the line for specialists, diagnostic tests, and elective surgeries at both public and private hospitals. In addition, austerity budgets since the Great Recession have cut funding for the National Health Service. The result has been a halving of intensive care beds since 1997. Private profits, not public needs, dictated that outcome.

THE US PROFIT-DRIVEN SYSTEM IS FAILING

The US system that Biden prefers is woefully unprepared for the COVID-19 pandemic. All indicators point to a coming spike in critical COVID-19 cases that will overwhelm the US healthcare system due to a shortage of equipment, hospitals, and health care providers.

The US system dominated by private insurance and delivery has less hospital beds per person than most countries. Unless otherwise indicated in the chart below, these countries' healthcare systems provide universal coverage. The "Public or Employer Insurance" systems provide universal public insurance with a "private option" to continue in employer-provided insurance plans option that were grandfathered into the overall system. The "Public Insurance Systems" are like the US proposals for Medicare for All providing public insurance and mostly private delivery. The "Public Health Service" systems are publicly owned, publicly administered, and publicly delivered. This chart using World Bank data shows the hospital beds per person and the type of health care system different countries have. 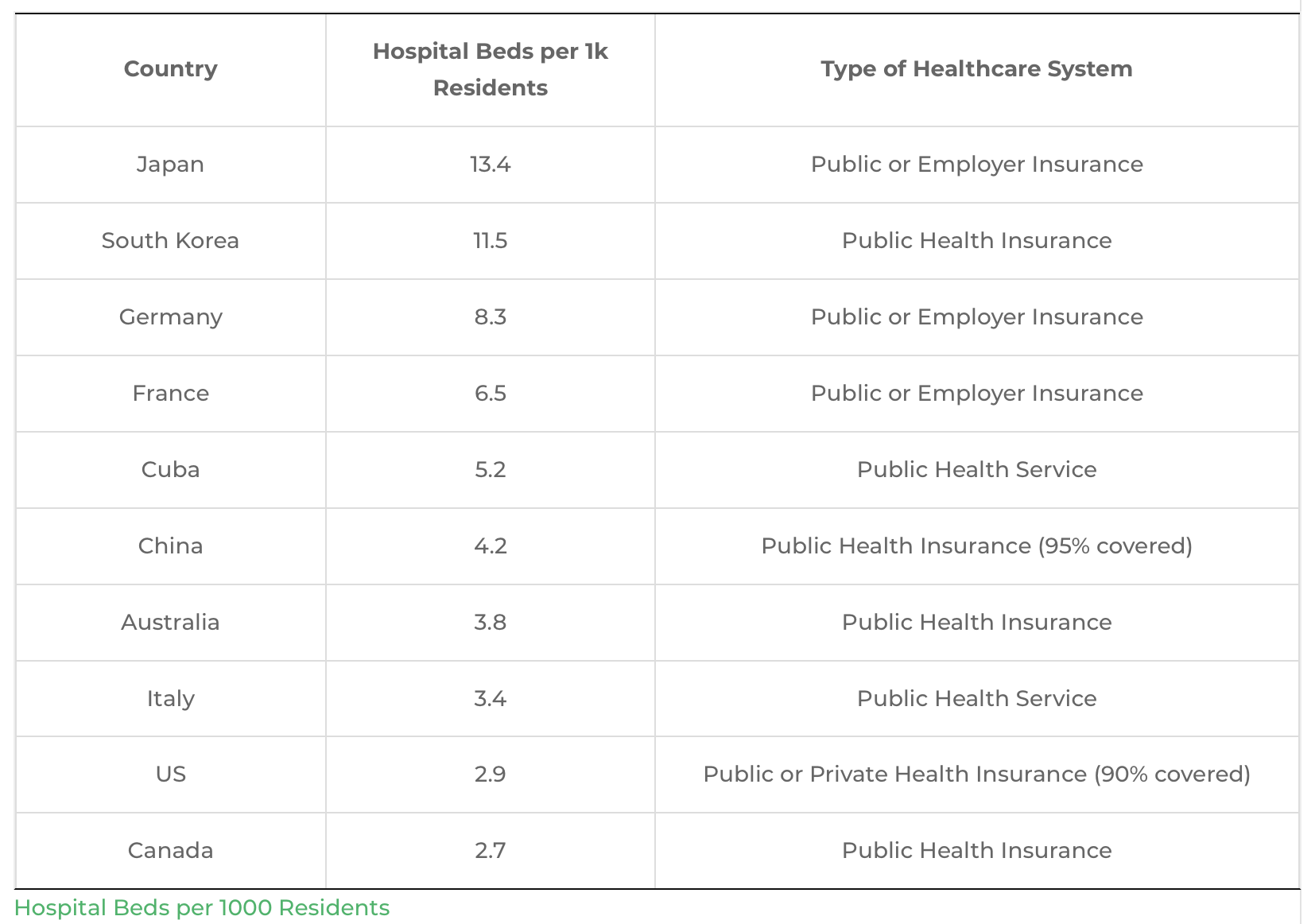 The US is short of test kits, respirators, hospital beds, and healthcare providers. There is no profit in building extra capacity for pandemics in a system driven by profits instead of public need. But Biden wants to preserve the profit system in health care. Here is the World Bank data for doctors per 1,000 people for those same countries. 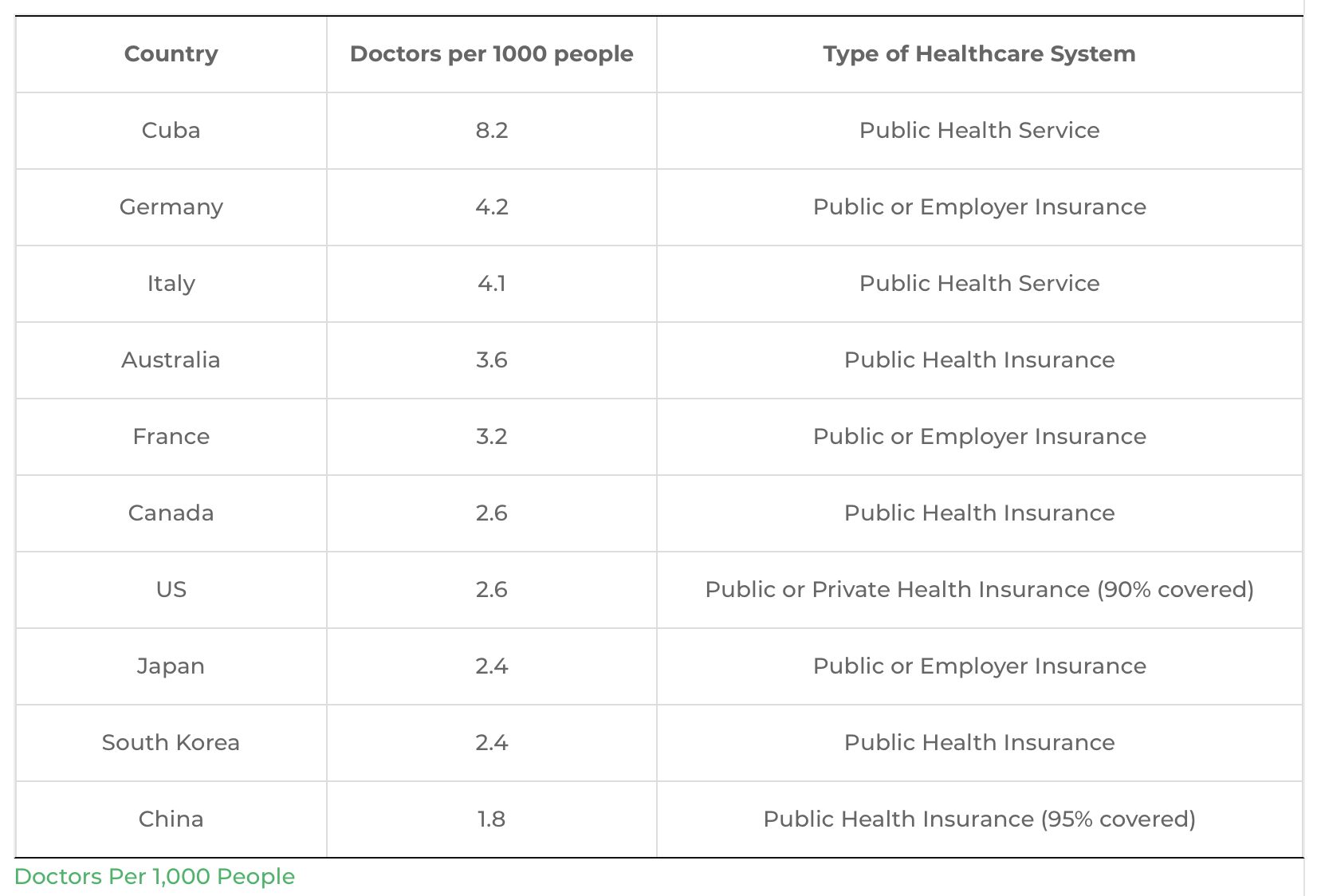 South Korea and Taiwan, which both have single-payer public health insurance programs, have been among the most successful countries in limiting the spread and severity COVID-19 cases due to a well-organized response coordinated by their public healthcare systems. Biden didn't refer to these single payer systems in his debate remarks. The responses of these single-payer systems have featured easy, affordable access to health care by all residents, a quick increase in the production and distribution of protective masks and respirators, widespread testing, and quarantining infected people instead of isolating the whole population from work and school. Their economies continue to function without major disruptions. The US profit-driven system is way behind on every health protection measure and its economy is tanking because major sectors of the economy have been shut down because the US can't test who is infected.

MEDICARE FOR ALL WOULD WORK BETTER THAN OBAMACARE

There are many ways in which improved Medicare for All would protect public health from COVID-19 far better than Obamacare with its complicated patchwork of thousands of public and private insurance plans that leave gaping holes in access and coverage. Biden doesn't know or care about these differences.

Everybody In, Nobody Out. Providing health care for all is a public health measure that reduces the spread of infectious diseases. COVID-19 spreads faster and farther under the current system because people avoid or delay care owing to the fact that they cannot afford it. Medicare for All is free at the point of care, funded by progressive taxes instead of out-of-pocket payments by patients. Coverage for everybody includes immigrants without regard for their documentation, which means they will not avoid care due to fear of deportation or costs and will not be spreading infections because they do not have safe or affordable access to the healthcare system.

All Medically Necessary Services. We call it improved Medicare for All because it provide all medically necessary services without the gaps in coverage and out-of-pocket costs of the current Medicare system for seniors. It would add coverage for areas current Medicare does not cover, including dental, eyes, ears, and long-term care, without co-pays and deductibles. This improved coverage would particularly benefit seniors who are the group with the highest risk from COVID-19 infection.

Doctors and Nurses Can Focus on Care. About half of the time of doctors and nurses is now consumed by the bureaucratic paperwork of the wasteful multi-payer insurance system. Single-payer Medicare for All would enable providers to focus much more of their time on care for patients. When COVID-19 cases peak, we expect a shortage of needed doctors and nurses. Medicare for All would expand their capacity to provide care.

Testing for COVID-19. Under Medicare for All, all medically necessary services, including COVID-19 tests, would be paid for by the public healthcare system. Private insurance companies and employers who self-insure charge deductibles and co-pays for services like COVID-19 testing.

Treatments and Vaccines for COVID-19. Many patients will not be able to afford the co-pays and deductibles for treatment and, when it becomes available, vaccination under the present system. Medicare for All will pay for patients' treatments and vaccines.

Death Rates from COVID-19. The availability and emphasis on preventive care under Medicare for All would result in a healthier population less likely to die at the higher rates we will see under our present system where patients, due to the costs, avoid or delay care for chronic underlying conditions that make them more susceptible to succumbing to a COVID-19 infection.

Medicare for All Costs Less. Medicare for All would mean more of our health care dollars can focus on prevention and care of COVID-19 patients instead of wasteful paperwork for billing and reporting in our bureaucratically inefficient multi-payer system. Biden promotes Obamacare – private insurance with public subsidies – with a public option to buy into Medicare. A single public payer system would eliminate the bureaucratic waste of navigating the billing and reporting paperwork for thousands of insurance plans that consumes 34% of the health care dollar. Medicare for All would save money in many ways:

Many studies have consistently shown that a single-payer system would cut about $1 trillion from the $3.6 trillion the US now spends on health care, or about a quarter of health care costs.

MEDICARE FOR ALL AS A COMMUNITY-CONTROLLED NATIONAL HEALTH SERVICE

The Medicare for All plan I have put forward would build a community-controlled National Health Service. The US would immediately provide improved Medical for All insurance. Then over a decade it would progressively convert the delivery system to public ownership and delivery by making hospitals and clinics publicly owned and health care providers salaried public servants. It would be a community-controlled National Health Service, governed by local health boards, with two-thirds of the board members elected by the public and one-third elected by the health care workers.

The National Health Service would be better at controlling costs because there would not be profit-maximizing providers and drug companies feeding at the trough of public health insurance. It would also be more accountable to community needs through the elected health boards.

In the 1970s, the health care debate revolved around three options. One was Nixon's plan, which involved federal mandates and subsidies for private insurance. This model is what we now have with the Affordable Care Act. The second option was Ted Kennedy's National Health Insurance model, what we today call Medicare for All.

The third option was Ron Dellum's community-controlled National Health Service. The Josephine Butler United States Health Care Service Act was introduced into every Congress for over 30 years, from 1977 to 1998 by Rep. Ron Dellums and from 1999 to 2010 by his successor, Rep. Barbara Lee. The legislation was developed by medical and consumer advocates, and particularly by civil rights movement veterans in the Medical Committee for Human Rights. It is time to bring that National Health Service model back and expand the health care reform agenda from socialized insurance for privatized care to a fully socialized and democratic system – publicly funded, publicly administered, and publicly delivered.