A universal guaranteed healthcare system does not only provide a basic human right - free access to healthcare - but it is the single most efficient tool to contain the spread of the virus and protect everyone, much more so than a tracking phone app! Silicon Valley high-tech companies like Google and Zoom are not the panacea when it comes to solving the current crisis; we can NOT rely on tele-health medicine, remote meetings, and Google classroom alone to ensure workers and students are cared for and succeed. These high-tech companies are making huge profits under the shelter-in-place orders by replacing public service providers and human presence with private online services while widening the gap of social and racial inequity. This is a dangerous slope. We must remain vigilant that the current crisis does not push us towards accepting more privatizations and the loss of our rights, but rather encourages us to envision a democratic ownership of public resources and services like public banking, public WiFi, a public energy system, a universal government-sponsored healthcare system and a nationalized vaccine industry.

NOW is the time to push for a BOLD Green New Deal!

Jake Tonkel, our Santa Clara Green and San Jose City Council District 6 candidate, has put together resources on his website to help residents navigate the uncertainty and struggles that COVID-19 has brought us. Jake also holds weekly livestreams on Facebook addressing San Jose's most pressing needs and proposals from the City. Make sure to follow Jake on Facebook, Twitter (@Jake4D6) or on his YouTube channel!

In addition to this effort, and along with two SCC Green Party county councilmembers Nassim Nouri and Tanya Khaledi, Jake has been active in the URG (Unhoused Response Group) COVID kit project to get essential information and supplies to our unhoused neighbors over the last two months. Jake has also been distributing bag lunches for San Jose middle-school and high-school students.

He recently co-wrote an op-ed on public banking for public good, an issue for which he's been an enthusiastic advocate for the past few years.

PLEASE consider donating to and/or volunteering for Jake's campaign! 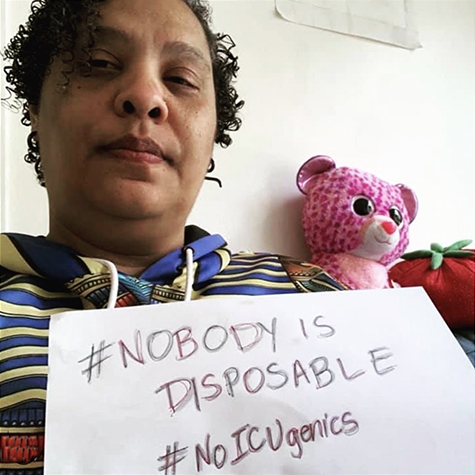 Michele Mashburn, one of our Santa Clara County Green Party councilmembers and the Director of the San José Peace & Justice Center, has brought our attention to an ongoing campaign led by disability rights activists against care rationing and discrimination in triage.

Thanks to her initiative, the Green Party of Santa Clara County has signed on to an open letter to care providers and hospitals about the dangers of following discriminatory triage policies and the need to care for people with disabilities, seniors, other marginalized people, and patients with HIV/AIDS and other illnesses during the devastating COVID-19 pandemic. YOU can sign on to the letter too!

The California Care Rationing Coalition has released a series of videos explaining the issue at hand with poignant testimonies. You can watch them here.

A rally/press conference was held in front of the Tesla Fremont factory this past Saturday, May 16 to protest against Tesla CEO Elon Musk's criminal disregard for precautions and country measures to save lives. The factory is set to re-open this week despite Alameda’s current shelter-in-place orders that do not allow factories, warehouses or manufacturing plants to operate. Nevertheless, under pressure from Governor Newsom and President Trump - as well as threats from Musk himself to relocate his headquarters outside of the state - Alameda county has caved in to his demand and Tesla workers are now being coerced to return to work without proper protection or else be fired. Tesla is putting profits and shareholders over the health of his workers in blatant violation of county and state's rules.

This protest was initiated by United Public Workers For Action (UPWA) and Workers Solidarity Action Network (WSAN) who are saying "Workers Health & Safety First! Lives Over Profit!" and calling for Musk to be arrested and jailed.

Now that the new guidelines from the County Health Officer that go into effect on May 22nd allow car parades, join the Car Caravan for Peace on Memorial Day! Let's meet at 3 pm at the Peace Crossroads (Stevens Creek + Winchester). Bring signs for your car with messages such as Healthcare Not Warfare, End Sanctions, War Is Not Green, etc. The plan is to go east on Stevens Creek, then San Carlos, then Third Street by the Federal Building, left to Santa Clara St, right on Santa Clara past City Hall and right on 7th St., passing the San Jose P&J Center. The caravan will end by dropping off donations at Grace Church on 10th and San Fernando.

This Memorial Day coincides with the UN Secretary General’s call for a Global Ceasefire, saying “the fury of the virus illustrates the folly of war.” It also follows the May 24th International Women’s Day for Peace and Disarmament, a day to raise up the cost of weapons and war to the planet.

We are meeting via conference call or Zoom until the shelter in place orders are lifted. Contact us if you plan on attending and we'll send you the information!

SAVE THE DATE: Green Party of California General Assembly

The Green Party of California (GPCA) will hold its virtual spring General Assembly on June 13 and 14. Registration starts Monday, May 18. The agenda as well as specifics are posted here.

The General Assembly (GA) is the primary decision-making body of the GPCA and consists of delegates from each active county organization. Delegates are selected by the counties each July and serve as delegates to both the GA and the online GA (the SGA).