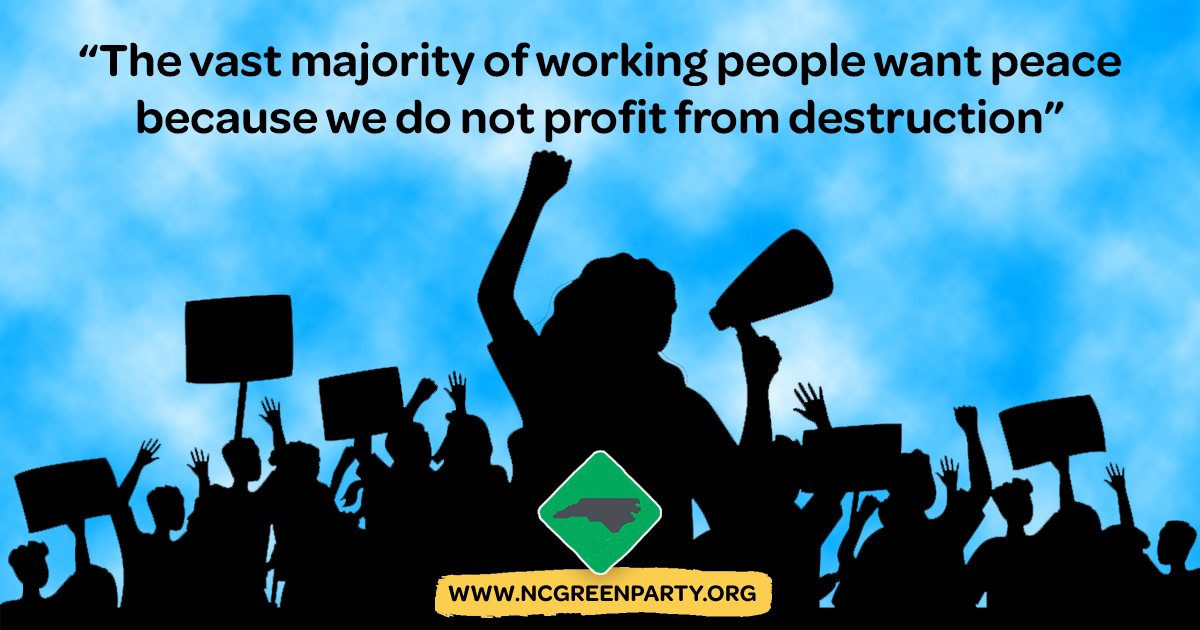 My name is Tony Ndege. I am a co chair of North Carolina Green Party and one of several National Co-chairs of the Green Party US Federation Today I come here first and foremost as an Anti-War fighter of more than twenty five years and one of dozens of organizers who helped to put together the largest action against US-led War in North Carolina history right here in Raleigh. Feb 15 2003. That event was part of the largest global Day of anti-war resistance in history.

So why despite the fact that tens of millions of people all across the globe in almost every country stood up for peace, did we not ultimately result in stopping or even halting the disastrous wars and occupations of Iraq and Afghanistan or to have a more potent lasting effect on Americans’ attitudes to war, militarization and imperialism?

One reason is because in the US (and most elsewhere) we do not yet have a genuine, radically independent workers party capable of organizing millions to shut this war economy down. Which is the only way we will have the power to end the wars once and for all. This cannot happen organically. We must be organized to strike at the very heart of capital - the heart of production if we wish to win victories of this magnitude. Capitalism cannot exist without war.

The great historical pillars of capitalism have always been war and nationalism, racism and the patriarchal exploitation of women. When economic competition fails to subjugate, military escalation, (no matter how insane), is always the go -to for the ruling class. And that is where we have come today in an era where the zenith of warfare means total nuclear annihilation!

The other reason for our loss of pro-peace continuity was that our movement, here in the heart of the US empire, was also dismantled to some extent, from the inside. (including by much of the self proclaimed “left!) Our ant-war movement which had grown to a massive scale was diverted into becoming more of an "Anti-Bush" movement. It was thusly dismantled in the ridiculously misguided and short-sighted hopes that diverting all of that righteous energy we showed in the streets into electing President Kerry would somehow magically give us more leverage toward ending the wars. Let’s make sure we never do that again.

Of course we would not see a President Kerry elected. However, ten years later, Secretary of State Kerry would play critical roles in continuing the equally disastrous occupation of Afghanistan as well as in the destruction of the state of Libya. Kerry’s boss, President Barack Obama would actually serve as the most potent weapon of political confusion perhaps ever, misleading millions of black and brown folks and people in poverty (who have historically been our most consistent antiwar demographics) into thinking that the ascendance of one of us to the head of the bourgeois war state would translate into a victory for all of us. This is what happens when we mistake symbolism and feel good milestones for deeper change.

The result is: today we've got President Joe Biden - evidently the best Wall Street could come with! The man who famously whipped Democrat support for the last Iraq War as chairman of the Senate Foreign Relations committee, who was gifted almost without question, a record $850+ billion dollar defense budget. This is rather fitting - Biden is the perfect humpty Dumpty figure for US Empire. Try as they might, all of Wall Street’s horses and men cannot piece back the post pandemic economy again.

The North Carolina Green Party stands united in the dismantling of the war economy and NATO, in transitioning that economy into millions of sustainable jobs, free education and healthcare. We also stand for ending mass incarceration and militarization of the police.

Don’t ever let anyone tell you or make you feel as though our demands are on the fringe. We are the majority. The vast majority of working people want peace because we do not profit from destruction. We want jobs that give us meaning and which help humanity - not divide and destroy us. We want a real stake in the future of our society and we want to wake up without fear of repression or sudden ruinage. Don't let anybody tell you wanting these things is too unrealistic. Our entire system is designed to force us into submitting to this falsehood. Stand up for your beliefs.Stand up for a world beyond war. Stand up for the very things Dr King stood up for in his monumental "Beyond Vietnam" speech . Let's stand up, get even more organized, and say no to opportunism and the dead end politics of lesser-evilism today.

With Love Peace and Solidarity,

Speech at the UNAC action on MLK Day 2023 in Raleigh, North Carolina