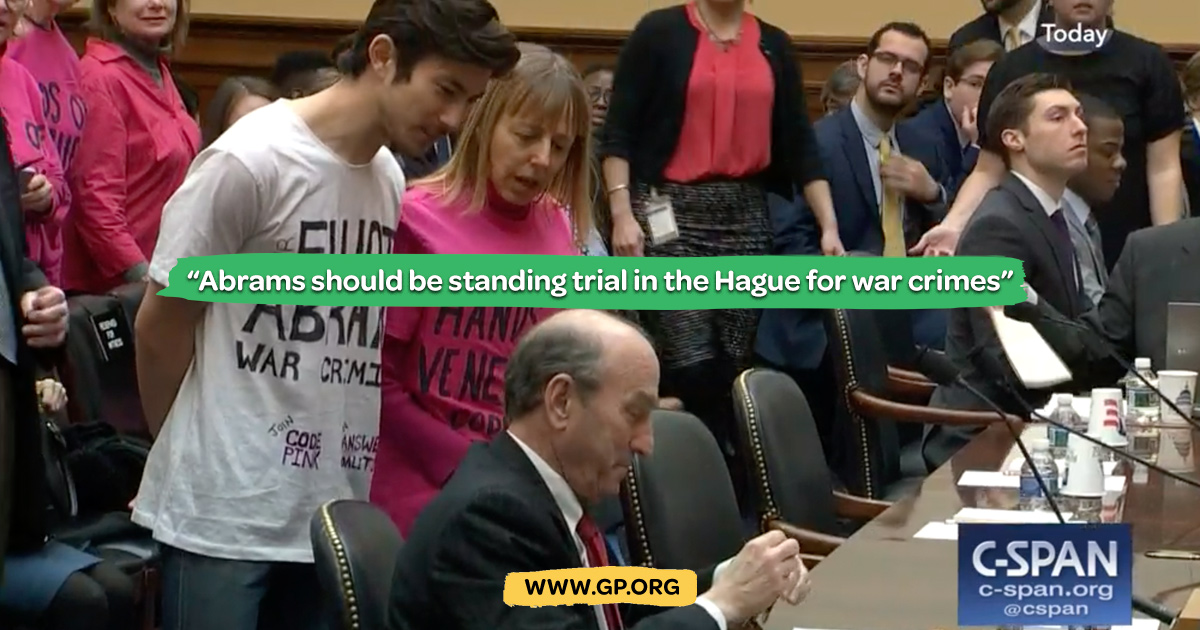 Washington, DC – Elliott Abrams' past took center stage when he testified before the House Foreign Affairs Committee on February 13, 2019. The combination of protests over his past war crimes and perjury along with the tough questioning by Rep. Ilhan Omar resulted in Abrams being publicly shamed on national television.

The controversy over the US coup forced the right-wing chairman of the Committee, Eliot L. Engel, to announce his opposition to US military action in Venezuela.

The stage was set during Elliott Abrams' opening statement when protesters from CODE PINK and the ANSWER Coalition interrupted him declaring, "Abrams is a war criminal" and predicting he would send weapons to bring war to Venezuela. Protesters also exclaimed that Abrams brought genocide to Guatemala and El Salvador. The room erupted in applause in support of the protesters as they were taken out of the hearing room by police. The protests were shown live on C-SPAN and have been shared widely in social media.

After the first two protesters were removed, another protester stood up to declare that "Abrams should be standing trial in the Hague for war crimes, not advising Congress about how to create a bloody coup in Venezuela. If you care about a humanitarian crisis. . ." She kept talking as she was dragged out of the room and Rep. Engel threatened to clear the room of spectators.

Shortly after that, another protester stood up and declared, "You are a convicted criminal. You were guilty of perjury and you are lying again. . ." These protests all occurred during Abrams' opening statement and set the stage for questions by Rep. Ilhan Omar.

Rep. Omar began her questioning of Abrams with the statement, "I fail to understand why [we] should find any testimony that you give today to be truthful." When Abrams tried to respond, she interrupted him and told Abrams her comment was not a question and silenced him. Omar went on to describe US-trained troops massacring civilians, including children and raping women and young girls, in Guatemala and asked Abrams if he still believed that massacre "was a fabulous achievement" as he had said in previous interviews. Abrams attempted to dodge the question and Omar persisted in her questioning. She continued this line of questions describing other actions and asking whether he would look the other way if genocide occurred in support of US interests in Venezuela. Abrams refused to answer and expressed his anger at the questions.

The Chair of the Committee, Rep. Engel, who is an avid supporter of Israel despite its war crimes against the Palestinian people and who has attacked Omar for her critical comments on AIPAC, said at the hearing that US military intervention was not an option in Venezuela. He couched his comments in terms criticizing President Maduro as well as President Putin and Chairman Kim Jong-un of North Korea. He said Congress has the authority to authorize military intervention and Trump cannot act alone.

On the same day, President Trump met with President Duque of Colombia. Trump told the media that "all options" remain on the table regarding Venezuela. He had previously talked about a "military option" on repeated occasions. For his part, far-right hardliner Duque called on the international community to "advance with the diplomatic siege" against Caracas. Trump is also scheduled to give a speech in Miami on Monday in which Venezuela will be the main topic.

Venezuela Analysis reported, "Tensions are expected to rise in the coming days along the Colombian border after Guaido announced that aid would enter the country 'no matter what' on February 23. A USAID press release stated that the aid would meet the basic needs of 5,000 people for 10 days."

Reporter Dan Cohen covered the OAS meeting today, February 14, and posted this series of tweets ending with Elliott Abrams threatening him for asking questions of him while he was walking on a public sidewalk.

An airline associated with the CIA has been making roundtrips from Miami to Venezuela and Colombia. Venezuelan authorities discovered weapons being sent to the opposition on one of those flights. McClatchy News reports on these flights and that this was also a strategy used when Elliott Abrams worked for President Reagan during Iran-Contra affair and other Central American war crimes.

The appointment of Elliott Abrams shows the real intent of the Trump administration – regime change at any price. Abrams' history of being associated with war crimes and mass civilian killings is not even debated. He should not be allowed to serve in government.

The reality is that the humanitarian crisis claims are a ploy for intervention in Venezuela. The truth is the US merely has to lift sanctions against Venezuela. The US and its allies need to stop stealing Venezuela's oil and gold wealth and allow the government to manage its own affairs without US interference.