House Democrats’ HR 1 – Faking the Funk on Voting Rights, Spreading Fear and Gunning For the Greens in 2020 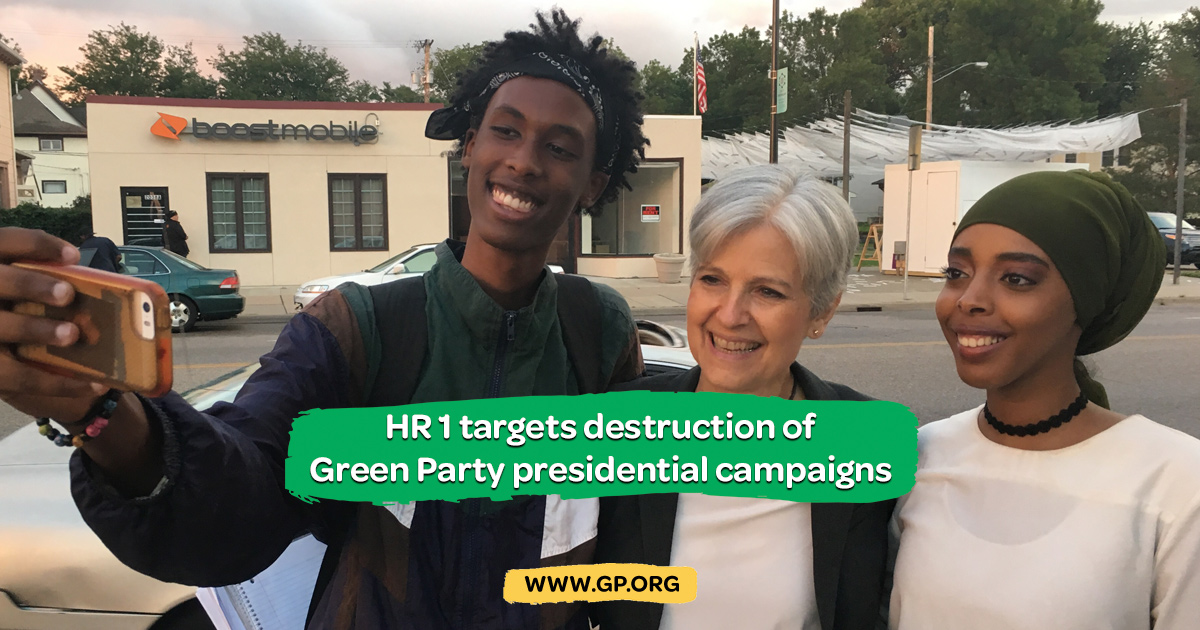 The truckload of empty promises, none of which House Democrats would keep even if they could begin with provisions for internet voter registration, for automatic voter registration via the records kept by state agencies, same day voter registration. HR 1 limits the conditions under which voters can be removed from official lists, and mandates the gathering and reporting of registration data at DMV facilities, and the age, race and ethnicity data on newly registered and moved voters. It makes the provision of false and misleading information on registration or voting a federal felony and it requires the electronic and mail transmission of blank absentee ballots to those who apply for them. HR 1 would establish a paper ballot requirement for federal election, and the establishment of a hand count audit procedure.

HR 1 would prohibit voter caging, the voter suppression tactic of sending non-forwardable direct mailings to blocks of voters in poorer neighborhoods where people move relatively often followed up by challenges to the voting rights of all those whose mail is returned, and it would limit the grounds upon which non-governmental actors can challenge someone’s right to vote. HR 1 would limit felon disenfranchisement in federal elections to persons currently serving time in a federal institution, and require state authorities to enable voting by mail in federal elections. It would overrule all the restrictive voter-ID laws recently enacted in many states by requiring the acceptance of pre-printed sworn statements as acceptable identification.

HR 1 would address gerrymandering by limiting the “any time we wanna do it” redrawing of congressional maps which have occurred in several states, and establish independent redistricting commissions which would be banned from drawing maps in favor of one or another political party. It would establish a pilot program in three states in which voters would get a $25 voucher they could use to donate to what the bill calls any “qualified” congressional candidate. It would establish a regime under which congressional and presidential candidates might apply for a 6 to 1 matching funds grant on funds amassed in donations of $200 and less. The current matching funds regime is 1 to 1 and for presidential candidates only.

The last hundred or so pages of HR 1 contain provisions requiring presidential and vice presidential candidates to disclose their tax returns and potential conflicts of interest, restrictions on how quickly executive branch employees could return to jobs in or lobbyists for the interest they once “regulated” as federal employees, bans on members of Congress serving on the boards of for-profit corporations and requirements for congression representatives and staff to disclose potential conflicts of interest.

All the voting rights, the ethics stuff and all the campaign funding stuff with one huge exception we’ll examine in a moment would be great good news if Democrats were even half serious about enacting it into law. But of course they’re not.

First, Republicans run the Senate and the White House. Republican Senate leader Mitch McConnell has already pledged the entire package of HR 1 is going nowhere, and Democratic Senate leader Chuck Schumer isn’t even bothering to introduce a matching bill in that chamber.

Second, Republicans are not about to give up voter caging, mass purges of young and minority voters, state voter ID laws, lightning round redistricting and the panalopy of devices they have built over the last 20 years which give them more state and federal legislative seats with millions fewer votes than Democrats. Third, nearly all the existing House Democrats earned their current seats and sustain their political careers catering to the whims of Big Real Estate, Big Ag, Big Oil and Energy, Big Pharma, the hedge fund boyz, the charter school sugar daddies and contractors of the Pentagon, the “Intelligence community” and the Homeland Security cops and private prisons are not about to commit political suicide either. When Trump proposed a record military budget in 2017, House and Senate Democrats added an additional 10% – by about the entire military budget of Russia in a shameless attempt to outbid Trump and the Republicans for the allegiance of military contractors.

More than 200 House Demorats only signed on to back HR 1 because they know it’s all hot air, empty promises they’ll never have to keep, but which they hope will make them look better than Republicans. Optics as they say, are everything. After all, didn’t Obama campaign on promises to raise the minimum wage, legalize union organizing and walk a picket line? Didn’t he let folks imagine he’d bring the troops home from Iraq and deliver helth care for everybody? I tworked for him, they suppose, and it will work for them. Nancy and her gang have led Democrats in the House since 2003. They’ve had plenty of chances to stand up for voting rights, for internet voting, for auditable paper ballots. They’ve sat on their hands while Republicans erected barrier after barrier to voting rights, and they’ve never lifted a finger before this to take the money out of politics. But they imagine people are so thirsty that the empty promises of HR 1 will erase their actual record.

There are only two parts of HR 1 which stand any chance of gaining enough active Democratic support – not the lip service they’ll play to voting rights and ethics but – and on which they could if they worked at it, get enough Republican backing in both chambers to pass through the 116th Congress and reach the president’s desk.

The first is a cluster of provisions which begin by directly citing the odious McCarthyite accusations of Prop or Not from two years ago as “congressional findings.” These baseless lies assert that left opposition to the two parties is motivated and manipulated by hostile foreign powers operating in social media, grassroots organizations and other places, and that these are imminent threats to the security of US elections. The bill requires the FBI, CIA, the Pentagon, NSA, Homeland Security and the rest of the so-called “intelligence community” – the same people who told us Saddam Hussein had nukes, and that “black identity extremists” are out to get us – to produce a yearly report on these manufactured threats to US electoral systems, specifically including the threats to national security by those who express dissident opinions. This part of HR 1 institutionalizes the notion that the left is an existential and foreign-sponsored threat to the security of the electoral process, and creates bodies to police social media.

The second piece of HR 1 which has a chance of gaining the bipartisan support it would need to become law, if Democrats want it badly enough, is aimed squarely at keeping the Green Party off the ballot in as many states as possible, and crippling the Green Party’s presidential campaign. This part of HR 1 quintuples amount Green presidential campaigns are required to raise to qualify for federal matching funds from $5,000 in each of 20 states by the last day of 2019, to $25,000 per state in 20 states. I was part of Jill Stein’s campaign team in 2015-2016, and I can tell you we met the old threshold in about 22 states, but it was a near thing. Eliminating federal matching funds for a Green Party presidential campaign would mean all but certain erasure of the Green Party from the ballot, not just for presidential but for local offices in at least another dozen states, since the laws of many states either require a presidential candidate, or a certain percentage of the vote to maintain a Green ballot line, and without a presidential candidate on the ballot – quite an expensive thing to do in many states – the number of votes our party can get will plummet. For a generation now, most Americans have told pollsters they want to see a real third party, not in the middle of the two, but well to the left of both. HR 1 isn’t serious about voting rights, but it’s deadly serious about limiting voter choices at the polls.

HR 1 is a brightly painted ice cream truck, playing loud music about voting rights, protecting the vote, ballots by mail, and getting the money out of political campaigns, and reforming the ethics of elected officials and their top appointees. But none of that stuff will pass while Republicans run the Senate, while Trump is in the White House, and while Democrats are on the corporate tit themselves. If Democrats take the White House in 2020 you won’t see that ice cream truck or hear these promises any more. The only things HR 1 can deliver are manufactured fear of the manufactured threats posed by Americans in America working for change, working to save themselves and the planet from capitalist robbery, genocide and ecocide, along with more voter suppression through the elimination of voter choices outside the two capitalist parties.

Bruce A. Dixon is managing editor at Black Agenda Report, and a member of the state committee of the Georgia Green Party. He can be contacted irectly via email at bruce.dixon(at)blackagendareport.com.