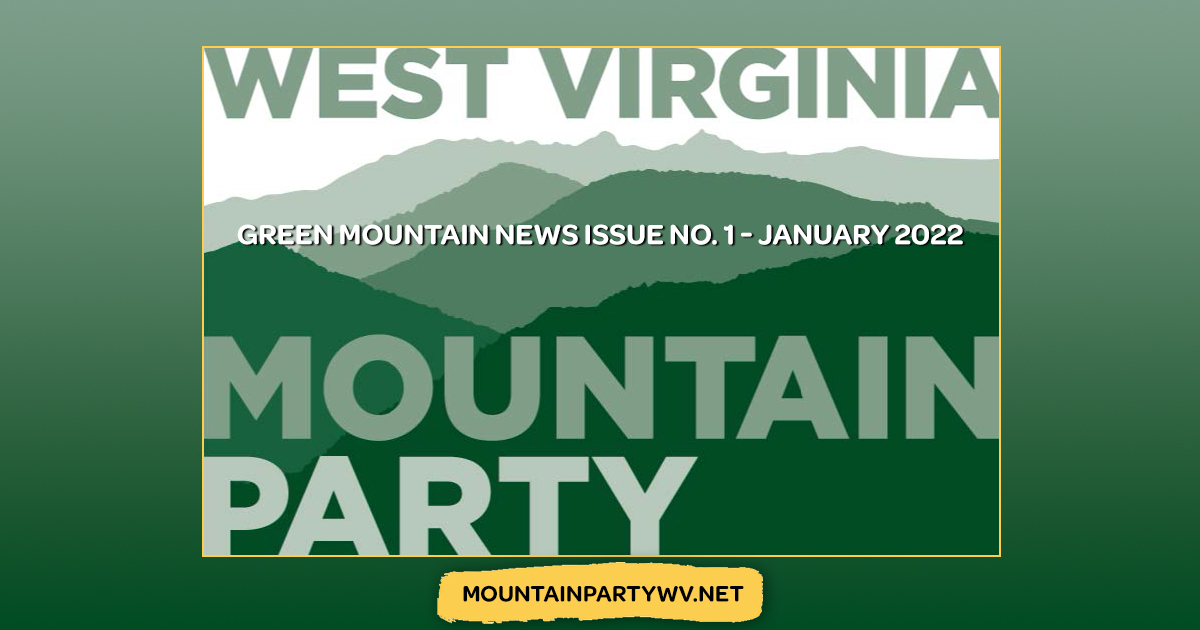 Biennial Convention Announced For May

The Mountain Party’s biennial convention for 2022 is planned for May in Morgantown. Business being addressed includes candidate nominations and amendments to our bylaws and platform.

The public and the press are invited to participate in our planned convention program. Social distancing will be observed and masks will be required. Specific times, venue, and other details will be announced in the next issue of the Green Mountain Newsletter.

(CHARLESTON, WEST VIRGINIA — January 12, 2022) The West Virginia Mountain Party rejects Governor Jim Justice’s false claim “that the State of our State has never been stronger.” The contradictory message was delivered in writing to the State Legislature due to the Governor testing positive for COVID-19.

First addressing the matter of the ongoing pandemic, Justice has painted the rollout of the COVID-19 vaccine in West Virginia as a complete success. This is despite his Do It For Babydog sweepstakes being a costly failure unable to effectively incentivize vaccination. To date, West Virginia’s COVID-19 vaccination rate is in the bottom third of all states, despite having the third oldest population (by percent) in the union. As of yesterday, only 55.5% of our fellow West Virginians are fully vaccinated. In comparison this falls below the national rate of 62.6% and the rates of our international neighbors, such as Canada at 77.8% and Cuba at 85.9%. 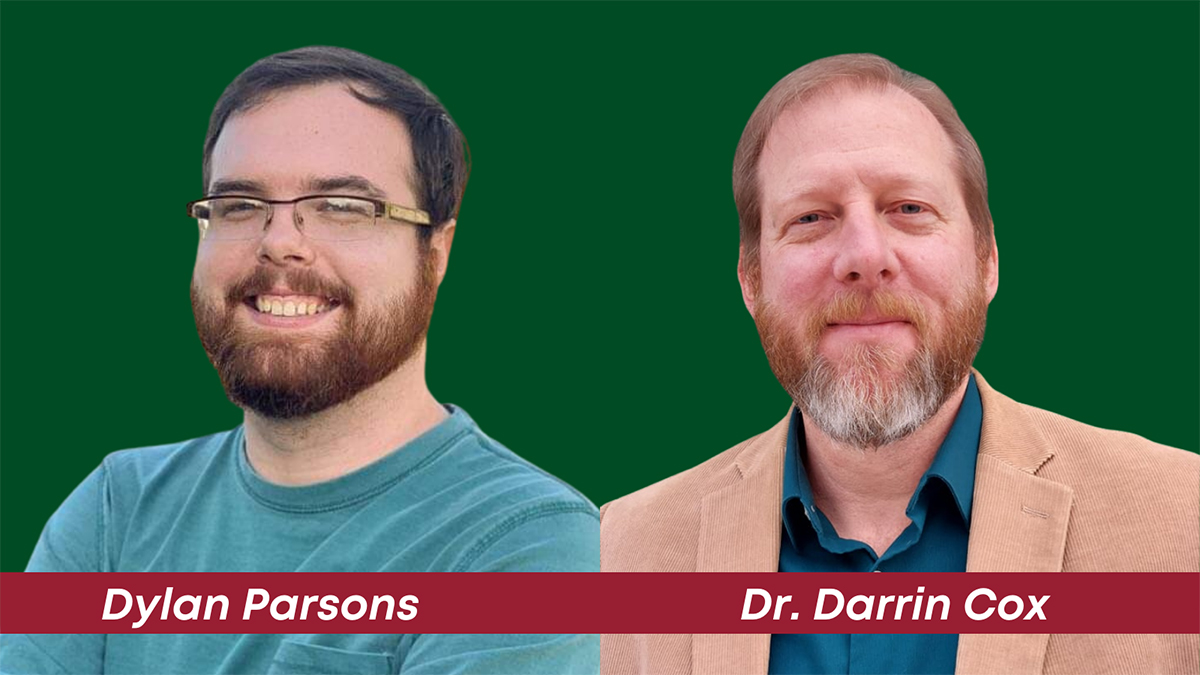 The Mountain Party is excited to announce that Vice Chair Dylan Parsons is leading our 2022 candidate slate by running for House of Delegates in District 7, which now runs through Marshall and Wetzel counties.

“Dylan would make an exceptional representative in the House of Delegates,” said Denise Binion, Chair of the Mountain Party, “Not only is he committed to our party’s values - he cares about his future constituents, many of whom are struggling to make ends meet.”

Also announcing his candidacy for public office is Dr. Darrin Cox for the non-partisan race of Board of Education for Ohio County. Dr. Cox has stepped down from the Mountain Party State Executive Committee to pursue this great opportunity.

Nearly two years ago, the Mountain Party proposed common sense ballot access legislation SB 733, aiming to allow the office of President in addition to Governor to the list of races used to retain ballot access for a political party. The bill had quad-partisan support, with sponsorship from Senators Trump (R) and Ilhenfeld (D) in addition to the Libertarian Party’s endorsement. The bill passed overwhelmingly in the Senate with 24 out of 34 Senators voting in favor. However, the legislation failed to make it out of committee in the House.

“While we don’t currently have a Green caucus in the legislature, the Mountain Party and our members can play an active role as citizen lobbyists,” said Robert Smith, who serves on the Mountain Party’s Legislative Committee, “For us, ballot access is ground zero. We can’t achieve our other goals if we as a party are outlawed out of existence.”

This year the Mountain Party is introducing similar legislation except with the addition of allowing ballot access retention to take place via party registration totals. The Libertarian Party has endorsed the legislation. At the time of this publication, no bill number was yet assigned to the ballot access proposal.

Primarily in opposition to bills backed by the GOP led supermajority, the Mountain Party will take positions on other legislation for the remainder of the legislative session. Announcements will be made on social media and our website, along with publication in our next issue of Green Mountain News.

Comments and opinions on bills being introduced in the State Legislature can be sent to the party by email: [email protected].

The Mountain Party is recruiting qualified candidates to run for elected office across West Virginia. Many seats are up for election in 2022. While much of the conversation is largely placed on the State Legislature, we are paying special attention to local races such as Board of Education and Conservation District Supervisor. Winning local level races is the foundation for the Mountain Party to achieve bigger wins in the future.

We are seeking candidates with the desire to run a successful campaign and engage voters. Experience in public speaking, administration and planning, along with a comprehensive understanding of financial reports and budgets, is very highly recommended. Potential candidates must share the values outlined in the Mountain Party platform of Democracy, Social Justice, Environmental Justice, and Economic Justice.

(CHARLESTON, West Virginia — January 18, 2022) In a coordinated dump of press releases by West Virginia Governor Jim Justice on the day of his State of the State message, it was announced that non-union steel manufacturer Nucor would be making a large “investment” into the state’s economy. The Governor’s statement is (at best) misleading.

The state will be giving Nucor over $1.3 billion for relocation to West Virginia, an outrageous expense to supposedly create several hundred well-paying jobs. The actual number of jobs and the pay tossed around by Justice and Nucor representatives are palpably exaggerated. Such obvious doubt is reinforced by Nucor’s mischievous past.

Senate Resolution 12 is a resolution being pushed by the Virginia-based anti-choice organization Day of Tears. It aims to designate January 22 as a day of mourning; on this day in 1973, the Supreme Court ruled in Roe v. Wade that abortion is a constitutional right. Day of Tears resolutions have been passed in Alabama, Arkansas, Louisiana, and Mississippi and similar resolutions will be introduced in a half-dozen more states this year. This resolution proposes that flags be flown at half-staff to honor what it falsely claims to be the “over 62 million unborn children [who] have perished” due to abortion.

This resolution is a slap in the face to the women, transgender men, and others whose reproductive freedoms were guaranteed in Roe v. Wade. While anti-abortion legislation is to be expected from religious extremists in the Republican Party, the West Virginia Democratic Party is no stranger to the crusade against reproductive freedom, even among its so-called progressive wing; it is therefore unsurprising that Minority Leader Stephen Baldwin is a co-sponsor of this resolution.

The Mountain Party, by contrast, has always been on the side of reproductive freedom. The Mountain Party calls for reproductive health care to be guaranteed under a universal healthcare system and for the expansion of the number of clinics in West Virginia who offer abortion care, and stands in solidarity with all those whose reproductive rights are threatened at the state and national level. 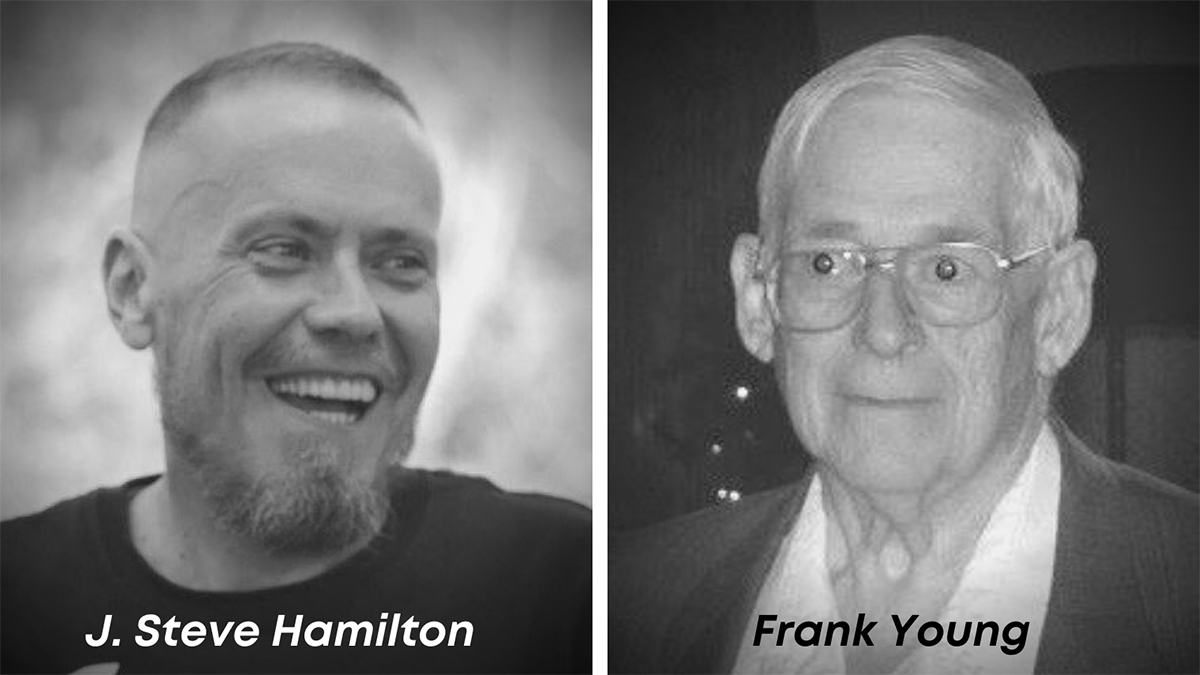 2021 was a year that contained both cheerful beginnings and sorrowful endings amongst our membership. Some notable additions to the party include Dr. Darrin Cox and Sue Thorn, both from Ohio County. Dr. Cox served as a regional member to the Mountain Party State Executive Committee (SEC) but has now stepped down to seek the non-partisan elected office of Board of Education. Thorn served as SEC secretary for the remainder of 2021 and looks forward to taking on a new organizing role for the Mountain Party in the Northern Panhandle.

While the party welcomed new faces, there were also some unforgettable and irreplaceable losses. Social justice activist, labor organizer, and SEC member J. Steve Hamilton of Harrison County unexpectedly passed away due to a heart attack on June 15, 2021. Long-standing environmental justice activist, Delegate to the Green National Committee (GNC), and Vice Chair of the Mountain Party Frank Young of Jackson County passed away suddenly on December 2, 2021.

By unanimous decision of the Mountain Party SEC, Dylan Parsons of Wetzel County was made Vice Chair in December to complete the remainder of Frank Young’s term and Chris Wolford of Harrison County was promoted to GNC Delegate, serving on the decision making body of the Green Party of the United States.

As we all know, the New Year is a time of making resolutions to change for the better. A news article from November of last year has been circulating again recently that states West Virginians are the most overweight Americans who also watch the most television. Time to cue up a self-improvement montage of dieting and exercise, right? Not so fast. I’d like to suggest a different direction for improvement through a New Year’s resolution: political involvement.

The philosopher Plato once said, “The price of apathy towards public affairs is to be ruled by evil men.”

If you are like most voters, there is good reason to be apathetic towards the modern political machine here in WV. While some lack information about the issues, others who choose not to participate do so in large numbers because they either dislike the current crop of candidates or find the system itself to be corrupt. Just like shedding those pounds that make your middle look pudgy, you have to put down the remote and do something if you want change. This is where the Mountain Party can come to your aid in regaining a healthy, properly functioning political system. For more on how, check out our party platform for yourself.

“Call it democracy, or call it democratic socialism, but there must be a better distribution of wealth within this country for all God’s children.”

“We must see now that the evils of racism, economic exploitation and militarism are all tied together. And you can’t get rid of one without getting rid of the other…. The whole structure of American life must be changed.”

The Working People's Party.
For The Common Good.