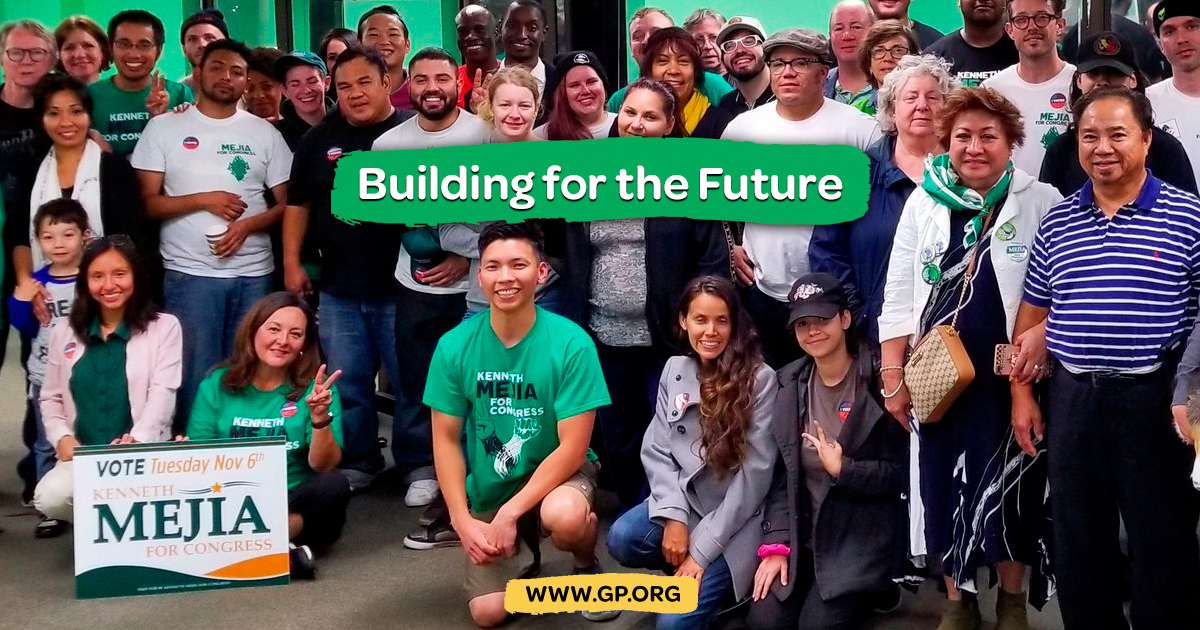 The Green Party lost ballot lines in Arizona, Maryland and Ohio based on the number of votes in the gubernatorial races; however, these races energized members, promoted public discussion of Green Party positions, and set the stage for future wins. The total number of states where the Green Party currently has ballot lines is 19 plus DC. Candidates can run in other states by petitioning to get on the ballot.

Millennial candidates Kenneth Mejia and Dr. Rodolfo Cortes Barragan got 25.8% and 22.1%, respectively, in two-way Congressional races against incumbent Democrats in California, despite being heavily overspent by their opponents and receiving little media coverage. Mejia’s and Cortes Barragan’s percentages were the second and third highest in history for a U.S. Green running for a U.S. House seat. Their high-energy, all-volunteer campaigns showed how much the Green Party resonates with young voters.

Candidates Sara Mae Williams, State House of Representatives, District 4, in Arizona, and Aaron Camacho, State Senate, District 31, in Wisconsin, were among 55 Native American women who ran for office this year, a record-breaking number.

Two hundred and eighty-five candidates ran on the Green Party line in 2018 and twenty were elected. Following are the preliminary results of the campaigns for ballot status, candidates elected/re-elected on November 6, and a sampling of the many noteworthy federal, state and local candidates running in this year’s midterms.

Connecticut (needed 1% for any office for minor party status for that office)
Peter Goselin got 1.1% for Attorney General

District of Columbia (needed 7,500 votes for any district-wide race for ballot status)
Eleanor Ory got 31,348 votes for U.S. Senate
David Schwartzman got 24,897 votes for City Council, At Large
Lino Stracuzzi got 8,287 votes for Delegate to the U.S. Congress
Ann Wilcox got 19,979 votes for Mayor

Massachusetts (needed 3% in statewide race for ballot status)
Jamie Guerin got 3.6% for Treasurer
Juan Sanchez got 3.8% for Secretary of the Commonwealth

Michigan (needed statewide candidate to get 1% of the vote for the winning candidate for Secretary of State for ballot status)
Kevin Graves got 72,070 votes for Regent of the University of Michigan (candidate with highest number of votes above the threshold maintains the party’s ballot status)
Jennifer Kurland got 28,857 votes for Governor
Marcia Squier got 40,215 votes for U.S. Senate
Sherry Wells got 61,519 votes for State Board of Education