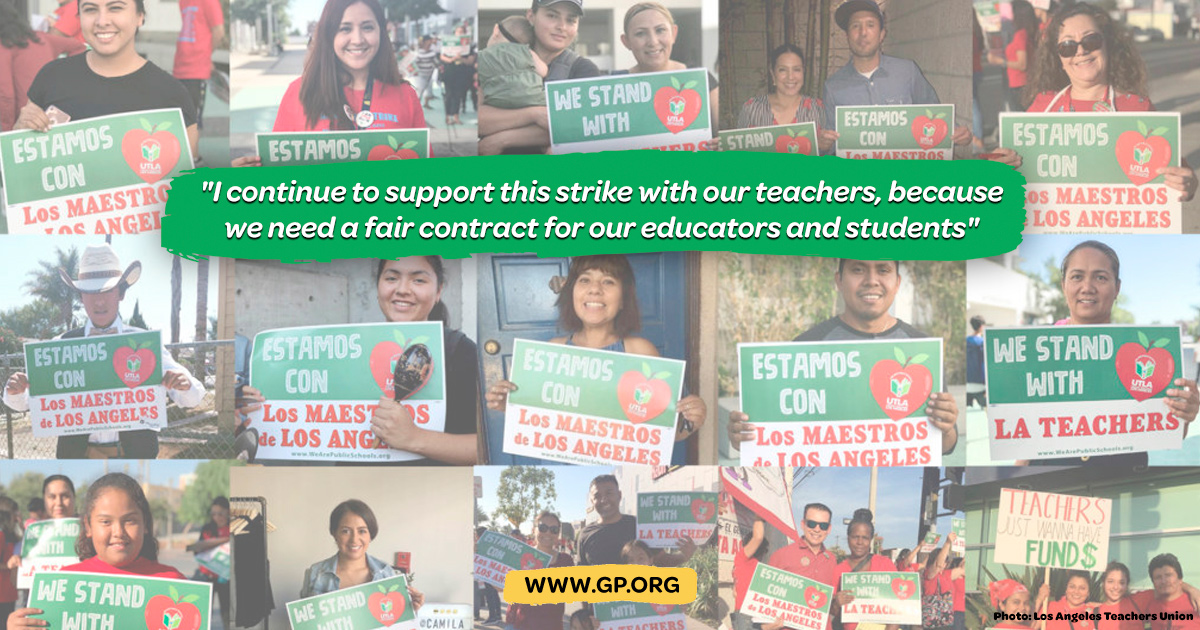 The Green Party of the United States stands in solidarity with the Los Angeles Teachers Union in their strike demands, including lowering class size and retaining/hiring essential support staff such as nurses, counselors, and librarians. We oppose education policies seeking to privatize public schools and bust unions and join with teachers to advocate for living wages for all workers. We support systemic change to strengthen labor and communities while ending the school-to-prison pipeline.

The strike has put approximately half a million students and their families into further precarious circumstances, caused by the failure of the political leadership of the school district and their refusal to bargain in good faith with the union. The district admits to a reserve of $1.98 billion and the California Public Employment Relations Board's neutral fact-finder affirmed key union positions. Therefore, a definite moral and social imperative exists in favor of the teachers union. By rejecting the continuing austerity attacks upon public education, the union is taking a stand not only on behalf of membership but all working Americans.

"The Green Party emphasizes its pro-labor platform and urges all Los Angeles area residents to stand in solidarity with striking school employees, and workers everywhere to join and support those refusing to cross picket lines in whatever capacity they can," said Tony Ndege, co-chair of the Green Party of the United States.

Andrew Stewart, a representative of the Young EcoSocialists, the GPUS Youth Caucus, stated, "Let no misunderstanding exist -- the neoliberal state leadership in California have been preparing for this strike. Their sustained, decades-long pro-privatisation assault on our public schools and every remaining lucrative institution in the public sector has been thoroughly bipartisan."

The Green Party urges resistance to efforts to break the strike using non-union substitute teachers or members of Teach for America and other alternative licensure programs, and emphasizes the need for a fair resolution to the strike so that students can return to their school routine. Many students depend upon free and reduced breakfast and lunch programs to provide for their weekday dietary needs. The Green Party rejects the moral blackmail that uses student health as a bargaining chip that benefits the school district in their fight against the union.

Gerardo Hernandez, a member of the Green Party Lavender Caucus and a sophomore at the Elizabeth Learning Center in Cudahy, California where teachers are on strike, said, "The teachers want the same thing that the community wants: smaller classes, essential equipment such as computers, and nurses onsite every day. Our students, small businesses, and schools from different cities are showing support of this strike for these basic needs that the LAUSD school district refuses to provide. This week has been very chaotic and I'm missing core classes such as math and biology that I need for the future, but I shall continue to support this strike with our teachers, because we need a fair contract for our educators and students."