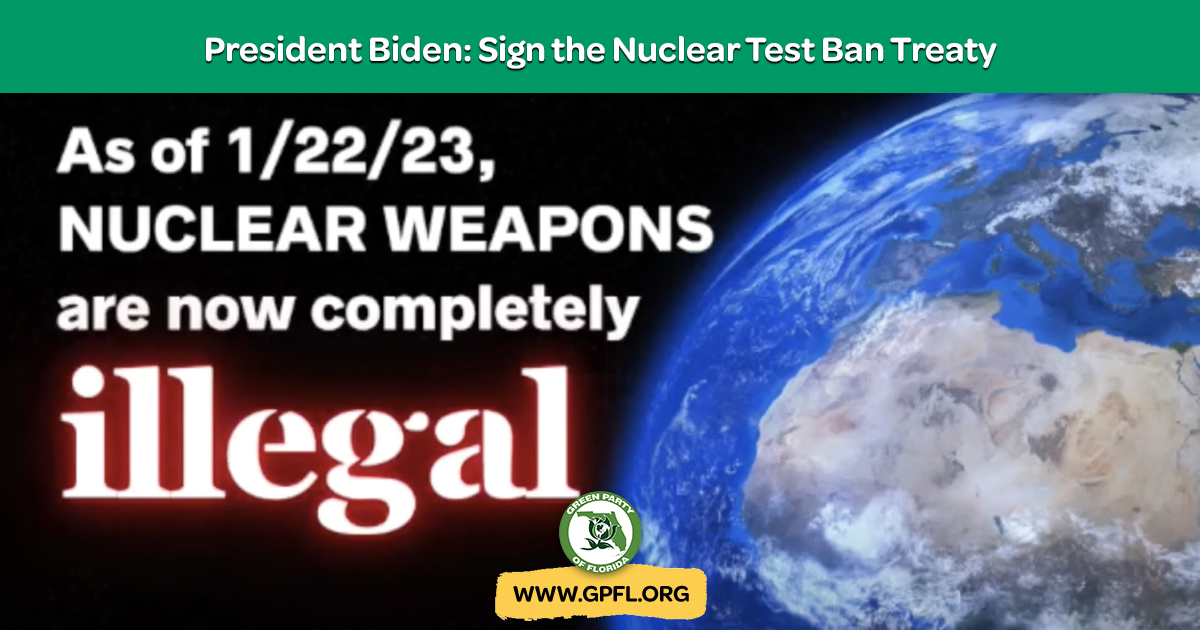 DC Statehood Green Party member David Schwartzman joined members of NuclearBan.us at The White House on Sunday to celebrate delivery of the Letter to President Biden which calls on the President to sign the Treaty on the Prohibition of Nuclear Weapons (TPNW) on the 2nd anniversary of Entry Into Force (EIF) just two days before The Doomsday Clock was set to 90 seconds to midnight, the closest it had ever been in its over-75 year history.

A two-person reading of excerpts of The Nuclear Ban Treaty gave a comprehensive survey of crucial aspects contained within.

Calls to Action were shared including:

Lobby your representatives on legislative initiatives:

On Tuesday, January 24 at 10 AM Eastern Time The Doomsday Clock was placed at 90 seconds to midnight to reflect the increased threats of extinction that humanity and Earth life is facing including the nuclear threat in part due to the war in Ukraine. Help spread public awareness.

The Historic Golden Rule Peace Boat is on an anti-nuclear educational and humanitarian voyage to promote Veterans For Peace calls to stop the war machine and abolish nuclear weapons. Miami-Dade Greens enjoyed their time and meals with the crew. Please check out the route, meet them at their scheduled stops sailing up the Eastern Seaboard of the U.S. and find out how you can support the effort at http://www.vfpgoldenruleproject.org.

Two-person reading of Treaty on the Prohibition of Nuclear Weapons - The States Parties to this Treaty, excerpts.
https://www.nuclearbantreaty.org/wp-content/uploads/2022/03/TPNW-text-excerpts.docx

The Green Party of Florida STATEMENT ON THE EXISTENTIAL THREAT OF NUCLEAR WEAPONS AND ON THE TREATY ON THE PROHIBITION OF NUCLEAR WEAPONS
January 22, 2023
https://www.gp.org/existential_threat_of_nuclear_weapons