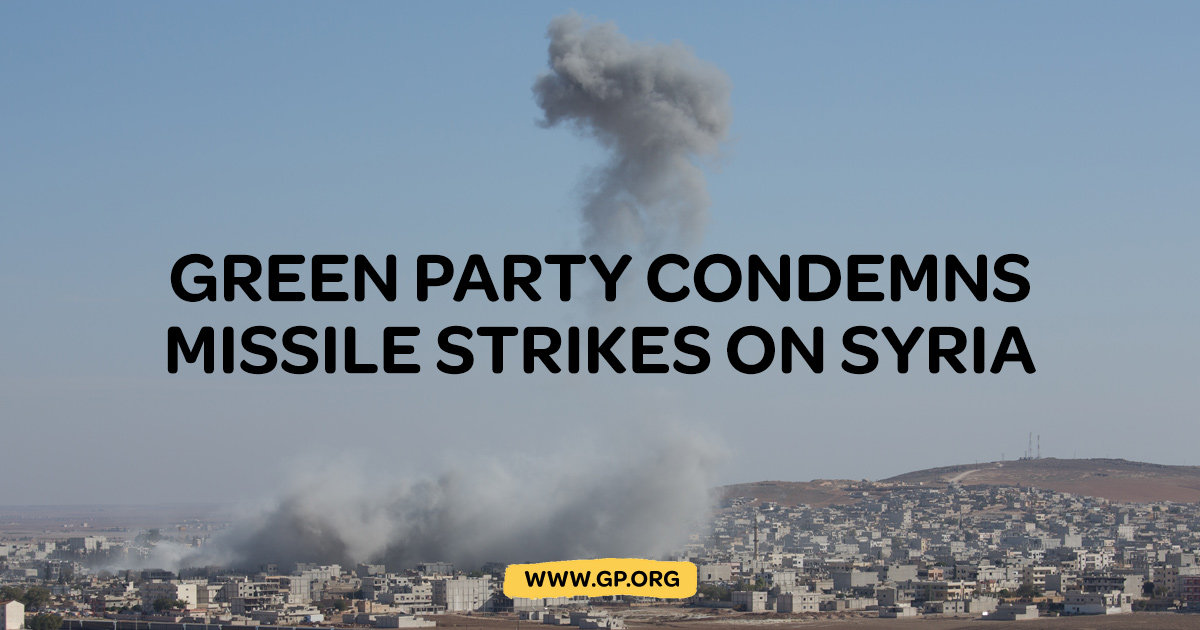 The Green Party of the United States condemns the missile strikes carried out during the early morning of April 14, 2018, ordered by the Trump administration on purported chemical weapon sites in Syria, in flagrant violation of both the U.S. Constitution and international law.

In a now signature impetuous style, the Trump administration authorized the airstrikes without first initiating an investigation into claims that last week, Syrian government forces used chemical weapons on the last insurgent outpost in Eastern Ghouta. Additionally, Germany and Italy declined to participate in the airstrikes, demonstrating that the Trump administration also failed to use any diplomatic process before acting.

"It is now the tradition of both Democrat and Republican presidents to act unilaterally, " said Tony Ndege, co-chair of the GPUS. "To strike, even when former American national security personnel have admitted there is no evidence of chemical weapons used by the Assad government or even to wait for an investigation, demonstrates a perpetuation of the war machine, regardless of the party," said Ndege.

The Green Party calls attention to the human rights violations currently unresolved on American soil while neither Democrat nor Republican administrations concern themselves with these situations. Regardless of whether the missile strikes were “effective,” as Syrian and Russia sources claiming that 71 of the 122 missiles were shot down, the Green Party of the United States decries the hypocrisy of the cost of around $224 million of the reported 112 Tomahawk missiles, when the total cost of replacing the water pipes of Flint, MI is estimated at $55 million.

The Green Party also points out that the President’s concern for “those suffering in Syria,” is not demonstrated in the government’s actions. During 2018, the Trump administration has only allowed 11 Syrian refugees onto American soil and has since suspended the entry of any other Syrian national, regardless of whether the individual constitutes a security risk (“Presidential Proclamation Enhancing Vetting Capabilities and Processes for Detecting Attempted Entry Into the United States by Terrorists or Other Public-Safety Threats,” September 2017).

Additionally, the Green Party takes note of the bipartisan saber rattling, in the lead-up to this morning’s air strike, as nearly 90 percent of Democratic U.S. senators approved of intervention in Syria.

"Not only do the Trump Administration's actions run afoul of the Constitution and international law, but the support from elected Democrats also threaten global peace and security by providing the political cover to justify a broader global conflict in a region already devastated by the Syrian civil war,” said Michael Dennis, Green Party co-chair. “Green Party candidates without fail have stood on principle for diplomacy and noted that Americans provide the most arms to the Middle East. Additionally, that violence worldwide is facilitated by American imperialism and our military industrial complex,” Dennis continued.