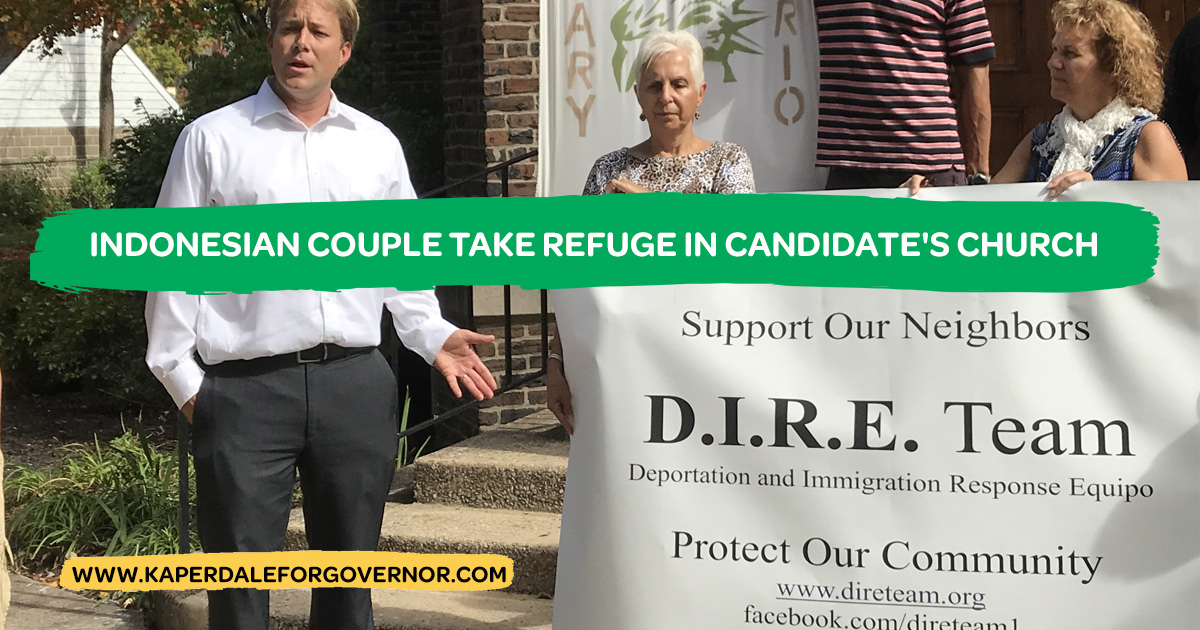 TRENTON, N.J. – A Christian Indonesian couple who fear they'll be deported if they follow orders to report to U.S. immigration officials have taken refuge in a church run by a candidate in New Jersey's governor's race.

The Rev. Seth Kaper-Dale, the Green Party candidate, offered sanctuary in the Reformed Church of Highland Park to Arthur Jemmy and his wife, Silfia Tobing, last week. They fear they'll join seven other Indonesians in New Jersey who were deported and four others who left on their own as Immigration and Customs Enforcement reviewed their status this year.

Kaper-Dale, who is waging a long-shot bid in the race to replace Republican New Jersey Gov. Chris Christie, has highlighted his long-running efforts to help immigrants living in the state illegally in his campaign. Kaper-Dale's church gave sanctuary to nine Indonesian refugees for almost a year in 2012.

Kaper-Dale said he has reached out to attorneys for the family, and said his actions were not politically motivated.

"Take a look at my track record since 2002. I have been fighting hard for this. I can't help if I'm doing real stuff," he said.

His welcoming of the Indonesian couple comes amid a national debate over President Donald Trump's immigration policies, and the same week immigration became a flashpoint in the governor's race.

The ad drew immediate backlash from Democrats, including former Vice President Joe Biden, who called it the "return of Willie Horton," a reference to an explosive 1988 anti-Michael Dukakis ad derided by many as racist.

Jemmy and Toing are part of a community of Indonesian Christians who overstayed their visas after fleeing persecution in the 1990s and early 2000s.

"It's very scary," said 40-year-old Jemmy, who was detained for three weeks in 2009. "We have to wait for a miracle. I hope Donald Trump can change his mind."

In 2013, they were granted a temporary stay of their deportation orders, allowing them to remain in the U.S. legally for a year. They were required to report to immigration authorities. However, ICE has said the group waited too long to file for official asylum.

ICE policy directs agents to avoid enforcement activities at houses of worship, schools and hospitals without approval from supervisors or in emergency situations, a spokesman said.

Hundreds of Christians fled Indonesia between 1996 and 2003, when churches were destroyed by anti-Christian extremists in the majority Muslim country. The U.S. government allowed many to enter the country on tourist visas after the fall of the regime of dictator Suharto.

Many established lives in the U.S. and had U.S.-born children. But after the Sept. 11, 2001, terrorism attacks, the government required all males between the ages of 16 and 65 to register if they had entered the U.S. on temporary visas from Muslim nations.

The National Security Entry-Exit Registration System program was scrapped last year by the Obama administration after years of inactivity. Legislation that would have allowed Indonesian Christians to reopen their asylum bids has failed to win congressional approval.

A federal judge in September put on hold the deportation of nearly 60 Indonesians in New Hampshire and Massachusetts who had lost their bid to remain in the U.S. In Connecticut last week, a former Fulbright scholar from Indonesia took sanctuary inside church after he was ordered by ICE to board a plane.