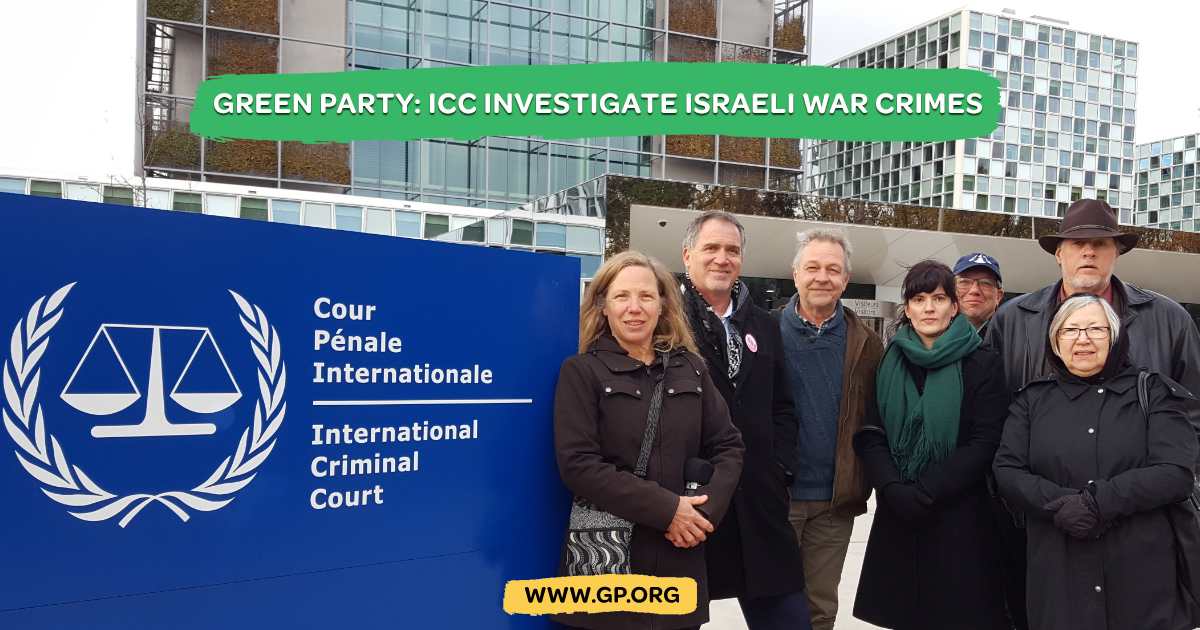 The Hague, The Netherlands – Members of the Green Party of the United States traveled to the International Criminal Court (ICC) today to deliver a letter calling for a full investigation of Israel for war crimes it has committed against the Palestinians.

In addition to being endorsed by the Green Party U.S., the letter was signed by over 1,000 organizations and individuals from the United States who want prosecutors at the ICC and the world to know that there is a political party and there are people in the U.S. who support holding nations accountable to international law. "The United States is complicit in Israel's crimes by providing financial support, selling weapons and providing political cover to Israel. Unlike the major political parties, the Green Party opposes these actions and has the courage to make this opposition official," said Dr. Margaret Flowers, Green Party U.S. co-chair.

Dr. Flowers and Miko Peled, a member of the Green Party U.S., a dual Israeli and American citizen and an author, met with a representative of the ICC Office of the Prosecutor to deliver a copy of the signed letter. The letter will be entered into the body of evidence being collected as part of a preliminary investigation to determine whether a full investigation will be conducted.

A delegation of Green Party U.S. members, many of whom are on the Green Party U.S. Peace Action and International Committees, made video statements outside the ICC after the letter was delivered. They included Kevin Zeese, Diane Moxley, Marie Spike, who authored the original draft of the letter, and Stephen Verchinski. The delegation was joined by Dirk Adriaensens of the BRussells Tribunal, which conducted a tribunal on Palestine. Miko Peled stated, "It was an honor to be part of the GPUS delegation to the ICC, to add our voice to the growing demand to investigate Israel for war crimes. Only when people of the world speak up will the Israeli perpetrators of war crimes and crimes against humanity be brought to justice."

Members of the delegation understand they have a responsibility to act and to educate others in the United States about the truth of the violent Israeli occupation of Palestine and apartheid state. It is by countering the myths put out by the media and U.S. lawmakers, due to the significant Israeli influence over them, and showing solidarity with Palestinians that the tide will shift toward justice for people living in the Occupied Palestinian Territory (OPT) and the millions of refugees who have been forced to flee.

"We cannot allow the US to continue to ignore the rule of law. We must show support for institutions, such as the ICC, that can be used to hold war criminals accountable and to resolve conflicts between nations," said Kevin Zeese. In fact, on the same day that the Green Party National Committee voted to endorse the letter, John Bolton said the United States would not cooperate with war crime investigations and called for sanctions against ICC judges if they proceed with an investigation.

The Green Party stands in support of One Secular, Democratic State for Palestinians & Israelis