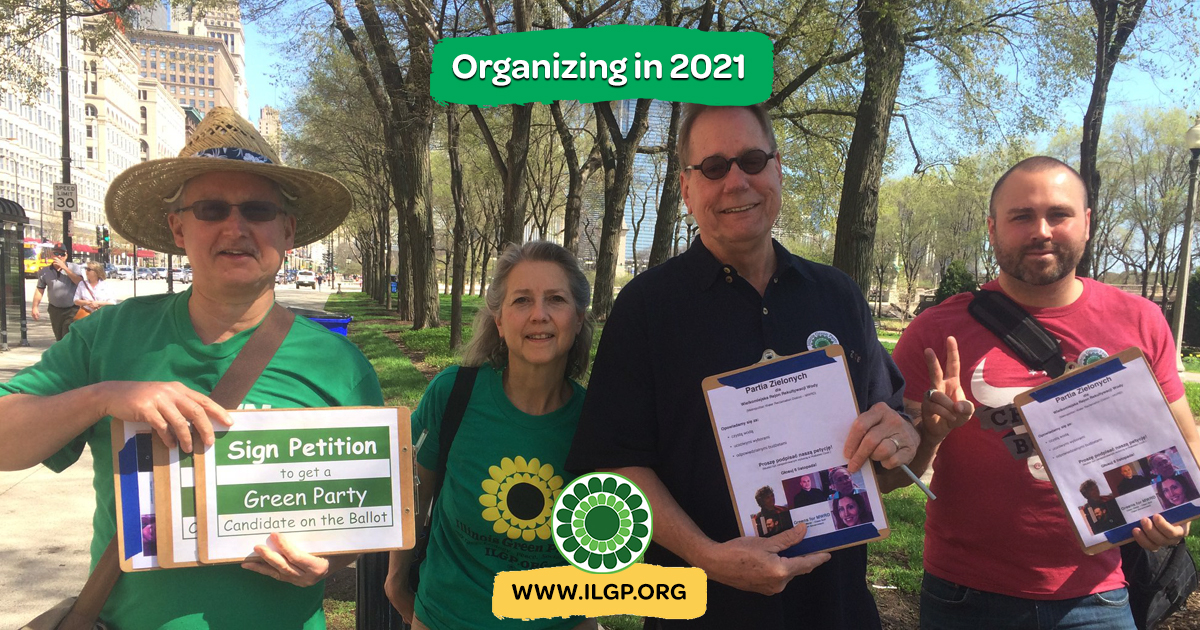 CHICAGO – Massive change requires massive organizing. Massive organizing requires big resources. The big donors from the corporations and the 1% will never support the changes the Illinois Green Party is fighting for.

Give what you can and keep working, learning, teaching and building whenever and wherever you can to make the world we want, need, and deserve.

For more information and to RSVP for events, visit www.ilgp.org/events.

>>> International Day of Protest: World Says No to War on Yemen

The Illinois Green Party supports the International Day of Protest against the war on Yemen on January 25, 2021.

This month, people in the U.S. and around the world are demanding an end to the brutal U.S.-supported war on Yemen. Since 2015, Saudi Arabia and the United Arab Emirates have waged war against Yemen, killing and injuring thousands of Yemeni civilians. After five years of war, roughly 14 million people are at risk of famine and over 24 million people rely on food assistance for survival. More than 2 million people have been infected with cholera, while an alarming dengue and influenza epidemic is gripping the country. The Saudi-led coalition’s blockade has impeded the flow of food, fuel, and medicine, threatening the lives of millions.

The U.S. has provided logistical and intelligence support for the Saudi/UAE air war and has provided billions of dollars’ worth of arms to Saudi Arabia -- despite its record of bombing civilian targets in Yemen, including hospitals and schools. By aiding Saudi Arabia, the United States is complicit in the senseless killing of innocent people. Moreover, despite Congressional opposition, the U.S. has continued its own direct military actions in Yemen.

Mark your calendar for a town hall on reversing the privatization of the Veteran's Administration health service. The VA is the closest we come in the US to a single-payer health care system. We must resist its destruction through progressive privatization, and instead work for improved Medicare for all.

WHAT: Zoom Town Hall Meeting on how we push Biden to reverse the privatization of the VA. (Illinois Single-Payer Coalition is a co-sponsor.)

The Illinois Green Party (ILGP) is a diverse group of individuals dedicated to advancing the Greens’ Ten Key Values in our political and social lives. The ILGP is both a political party and a membership organization. The ILGP is affiliated with the Green Party of the United States and is part of the international Green movement. The Global Greens have affiliated Green parties in 72 countries around the world!