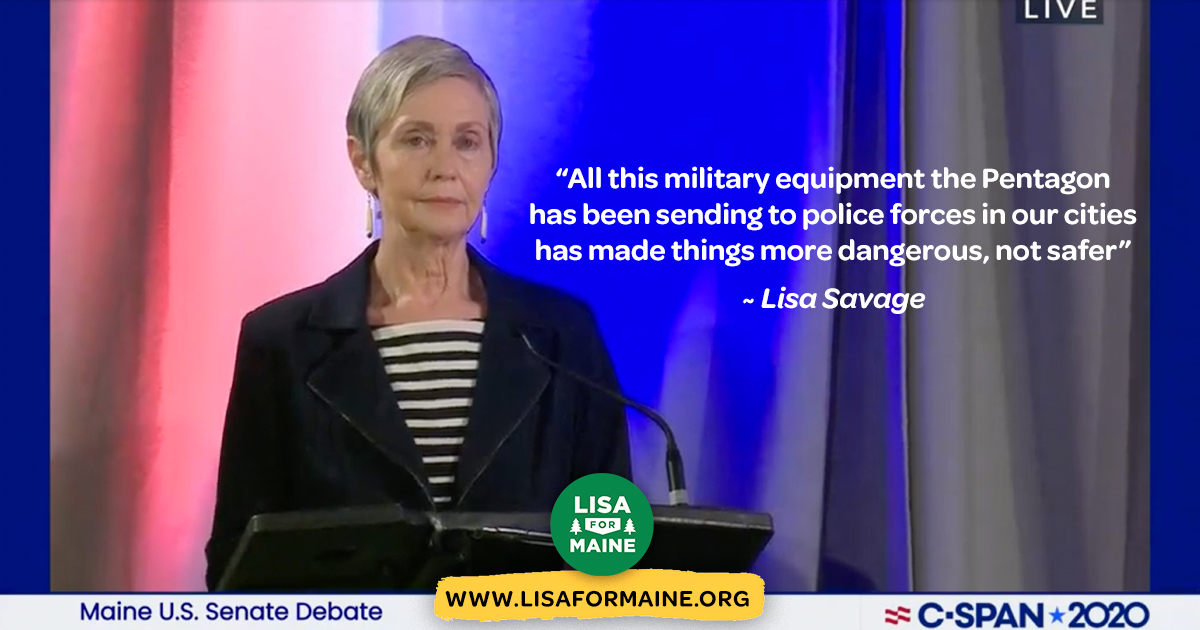 Appearing together for the first time, alongside independents Lisa Savage and Max Linn, Collins and her well-funded opponent were more respectful than the barrage of negative advertising that is filling Maine's television airwaves.

But the debate – jointly sponsored by the Portland Press Herald, the Bangor Daily News and News Center Maine – highlighted major policy differences between the two front-runners on issues such as access to quality health care.

Gideon, who is now House speaker in the Maine Legislature, responded by accusing Collins of voting with her Republican colleagues to undermine the Affordable Care Act that has provided insurance to tens of thousands of Mainers.

"Senator Collins likes to be on both sides of the health care issue, holding up her vote against repealing it on one hand but voting 12 times to either undermine it or repeal it in other cases, and then voting for the tax bill that has put it in jeopardy," Gideon said.

Gideon and Collins are waging the most expensive race in Maine history, with an unprecedented $40 million raised by the two candidates as of earlier this summer plus more than $30 million spent by outside groups as of earlier this month. Maine's Senate seat is among a handful nationwide widely considered to be at play, with control of the Senate potentially at stake.

Friday's debate also gave voters a chance to hear directly from Savage and Linn. Although both are considered long shots to win the seat, the two independents could force a ranked-choice retabulation of the vote if they pick up enough votes to keep either Gideon or Collins from winning a majority on the first vote count.

"Ranked-choice voting is a game changer and, of course, I am in this race running for Medicare for All and a demilitarized Green New Deal," said Savage, a longtime teacher and Green Independent from Solon.

A peace activist, Savage argues the United States could create more jobs while helping to fight climate change by redirecting federal defense spending to "green" infrastructure projects. She also has been active in the protest movement calling on Bath Iron Works to shift some of its production away from Navy destroyers and, instead, build "clean energy" systems.

Linn lived up to his reputation as the wildcard in the race, repeatedly declining to answer moderators' questions and instead attempting to talk about issues he wanted to highlight, particularly his opposition to Central Maine Power Co.'s plan to build a transmission line through western Maine to bring hydroelectric power from Canada to the New England grid.

But in the process of portraying himself as "that something different" to big-money politics, Linn passed up his chance to address questions on health care, the economy and other issues.

"I am competing against $100 million here," said Linn, who ran for the Senate as a Republican in 2018 but failed to qualify for the primary ballot this year. "They are the front-runners. In order for me to be the U.S. Senate candidate, I have to be out of the box tonight."

"And we need to know where you stand on the issues," replied moderator Pat Callaghan of News Center Maine.

On the issue of health care, Savage said that as a teacher in rural Maine, she saw firsthand families struggling for medical and dental care. Savage said she supports a single-payer, universal health care system such as Medicare for All while expanding it to include dental care.

Linn, when asked to answer a question on health care, responded "request denied" to the moderators. Instead, he spent his time during several questions talking about his new website.

The four candidates covered a wide range of other issues, from racial injustice and the Black Lives Matter movement to money in politics and how to ensure the solvency of Social Security.

Collins and Gideon traded barbs over the senator's support for Trump's judicial nominees and about the huge amounts of money flowing into the race, with both accusing the other of courting "dark money" groups funding many of the attack ads.

While Gideon said she would support repealing the Supreme Court's Citizens United decision, which opened the floodgate to unlimited political spending by corporations, unions and other groups, Collins said she would not support overturning Citizen United because "it would not do anything to ban dark money," the term used for money raised by groups who are not required to disclose their donors.

Trump also was a focal point in the debate, with Gideon at one pointing asking Collins a question that the senator has been fielding for months but so far has declined to answer: whom will she support in the upcoming presidential election.

"I don't think that the people of Maine need my advice on whom to support for president," Collins replied. "Last week I was on a bus tour all over the state of Maine. Not a single person asked me who should be the next president. What they did say was how grateful they were for the Paycheck Protection Program that I wrote because it preserved their job or their small business."

But Gideon later returned to the issue as she accused Trump of choosing to "sow division and hatred, even putting tear gas into the crowds of peaceful protesters" in response to racial justice rallies.

Gideon announced her plans to enter the Senate race after Collins cast one of the deciding votes to confirm Supreme Court Justice Brett Kavanaugh, whose nomination became a lightning rod after he was accused of sexually assaulting a classmate while in high school.

Groups involved in protecting women's right to an abortion also have expressed concern that, if given the chance, Kavanaugh will vote to overturn the landmark Roe v. Wade decision.

Gideon said Trump has led "a concerted effort to change the face of the judiciary."

"And we have seen nominees come from this president that are unqualified and not fit to be judicial nominees," Gideon said. "Yet Senator Collins had voted as of this week for 170 of them, some of them the American Bar Association had said were literally unqualified to be a judge."

Collins said that she has applied the same standards to all the judicial appointments throughout her career, including supporting both of President Barack Obama's Supreme Court nominees "because they were qualified, they were experienced, they had integrity." And she criticized some of her Senate colleagues for announcing they would oppose nominees before Trump even announced them.

But after Gideon criticized her judicial votes, Collins turned the focus back on the Democrat by asking if she would have voted to support the nomination of now-Chief Justice John Roberts.

Gideon responded by saying she would have to "fully study" the question on Roberts before answering.

Linn, who ran as a "Trump Strong" Republican for the Senate in 2018 but has also run for office in another state as a Democrat, pledged to support a women's right to access an abortion even though "it may not be right in my family."

"Under no condition would I ever impose any laws or regulations that would ever hamper a right to choose," Linn said. "That is between her doctor and her God."

Savage, meanwhile, said she would not support any litmus tests for judicial nominees.

"It does seem that judicial appointments have become much more politicized in recent years," Savage said. "I don't actually favor a litmus test for judicial appointments. I would look not only at a record of a judge in terms of the rulings they have made but also at issues of character."