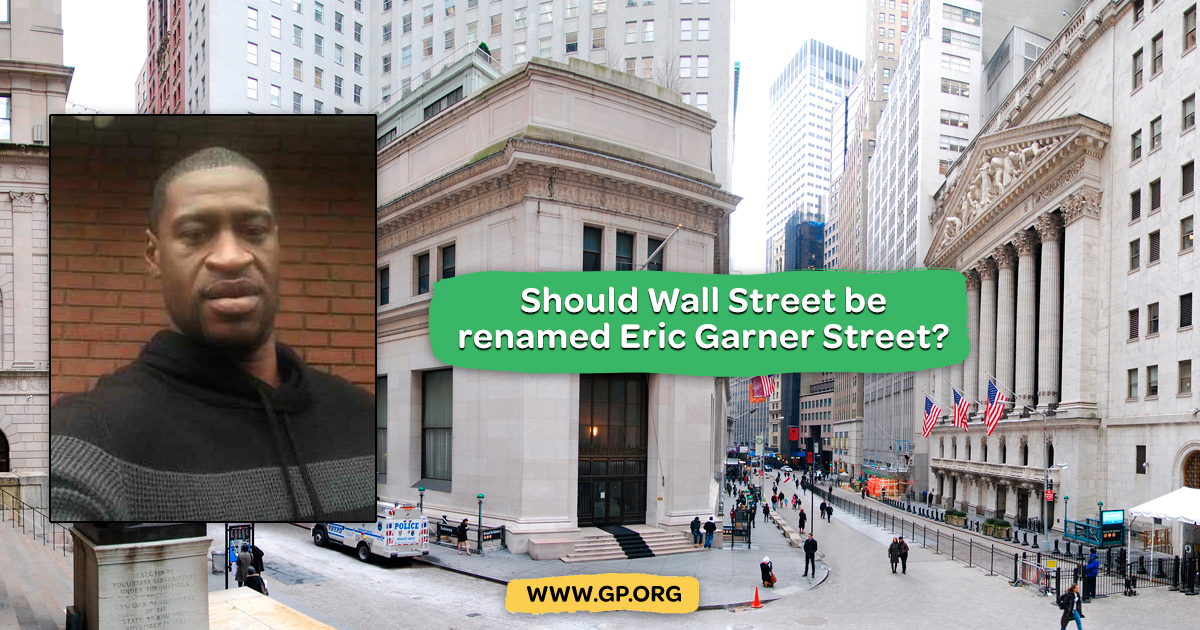 Some of these are sincere. Others are crocodile tears shed in hopes that people will be pacified with assurances that turn out to be vague rhetoric devoid of meaning or else empty promises that will never be fulfilled. Yet, there are changes that would cost little, could happen quickly, and be reminders to future generations of what happened in 2020.

St. Louis offers a unique opportunity which is being addressed by a coalition of the Universal African Peoples Organization, Green Party of St. Louis, Tauheed Youth Organization and Beloved Streets of America. Delmar Blvd., which spans both the City and County of St. Louis, intersects with Sgt. Mike King Dr. 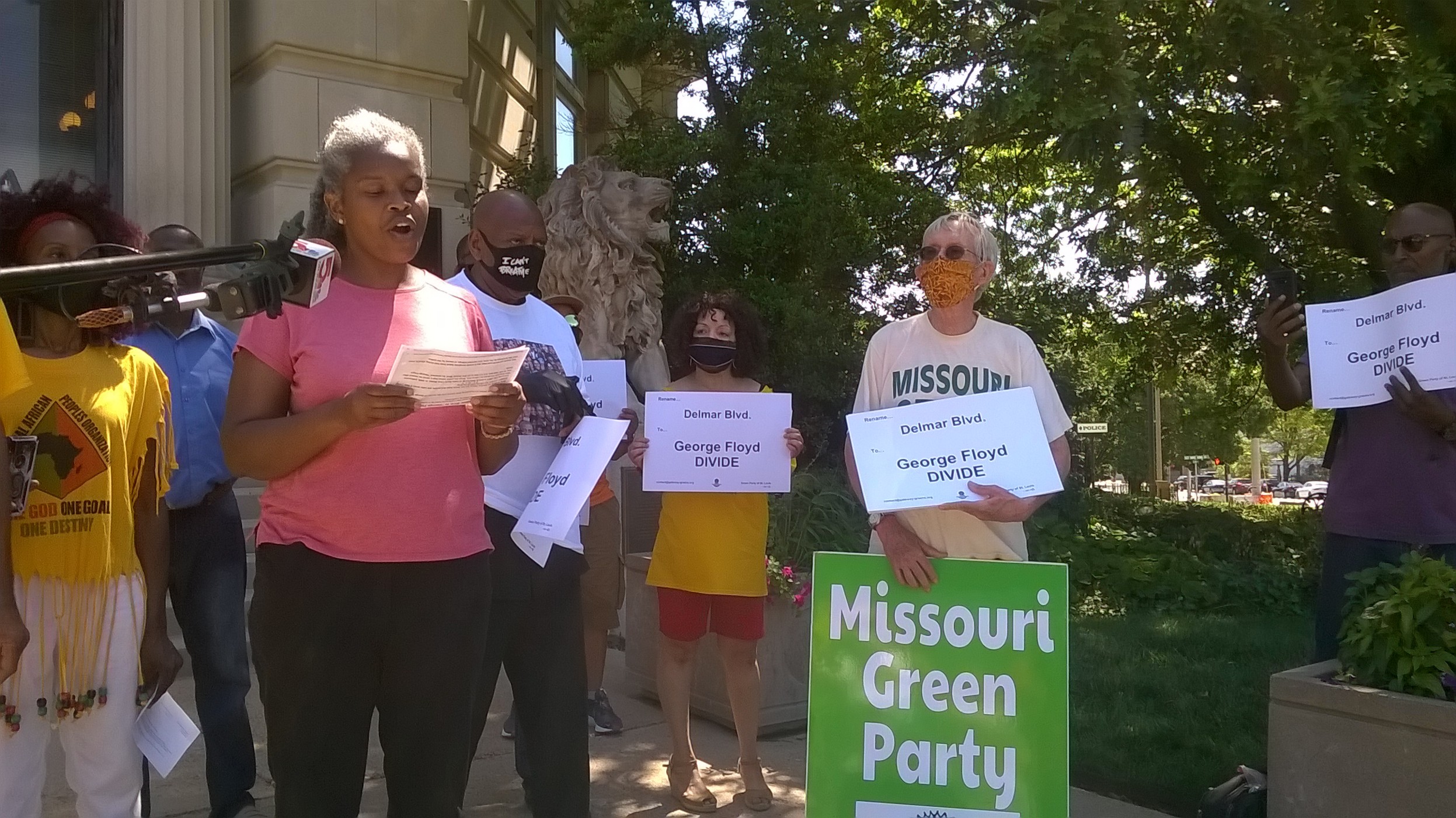 In 2008, policeman Mike King was murdered on Leland Ave. When the police asked that a street be named after him, no one objected. The City Hall of University City (part of St. Louis County) is now at the corner of Delmar Blvd. and Sgt. Mike King Dr. The coalition believes that anyone who agrees with naming a street after a cop killed by a civilian should also agree to name a street after a civilian killed by a cop.

We came together saying that Delmar Blvd. Should be renamed "George Floyd Divide." Why "Divide?" Jesse Todd, a black Alderperson from the 18th Ward, explained the racial divide for the June 23 press conference co-sponsored by the Universal African Peoples Organization and the Green Party of St. Louis:

"St. Louis is two separate cities: one north, one south. Separate and unequal. I support renaming Delmar to George Floyd Divide. People living north of Delmar do not get the same city services as those living south of Delmar. North of Delmar the poverty rate is higher, life expectancy lower, and the infant mortality rate is higher. In many places there is a food desert. This is a historical time. Future generations will know about this movement."

One reason for including the word "Divide" in a street name is that it would slice like a hot knife through a stick of butter, separating those who demand that the US forever remember its history of racist crimes versus those who utter soft words of sympathy which they know will soon be forgotten.

Tamala Turner, speaking on behalf of the Green Party of St. Louis remarked:

"Decades from now, when many of us will be gone, children will look at the intersection of George Floyd Divide and Sgt. Mike King Dr. and ask why the streets have those names. Their relatives might say, 'You will need to ask your grandparents because they were teenagers who marched in the great demonstrations of 2020. In those days police killings were common and the old Delmar Blvd. served as a divide between whites who enjoyed civil rights and blacks who were disrespected and brutalized, not only in St. Louis, but throughout the country.'"

As publicity went out, opposition swiftly came from those who seemingly did not want their descendants to be taught the true history of St. Louis. Some criticized use of the word "Divide" as being divisive at a time when we "all need to unify." Of those who raised this concern, not one proposed that the name "Sgt. Mike King Dr." be changed because it was "divisive." When a reported asked Anthony Shahid why the coalition would ask for a change in the name of a street which had no connection to racism, he reiterated that the entire city is well aware that Delmar is a divide between black and white St. Louis.

Even before the press conference began, a reporter from Channel 4 called me and demanded to know if focusing on something minor like street names would divert attention from the meaningful issue of police reform. Despite my repeating multiple times that those advocating this change had been protesting police brutality for decades, the reporter insisted that he "was not being argumentative" but that we must recognize how unimportant street names were. He was unable to grasp that statues and street names throughout the world exist to glorify the most murderous heroes of the ruling class. One of the first acts of any revolution is to remove monuments of the oppressor and replace them with images of those who have suffered and resisted.

This is why one of the main speakers at the event was Melvin White, who heads "Beloved Streets of America (BSA)." For years, that organization has focused on the realization that US streets named after Martin Luther King tend to be some of the most neglected streets in town. BSA desires to rebuild them to become beautiful icons of the man who is their namesake. White pointed out that we were gathered on Delmar, one of the nicest streets in the St. Louis area. He would love having a black person's name attached to an attractive street for a change.

The Universal African Peoples Organization (UAPO) has challenged police murders and cover-ups for over a quarter century. Zaki Baruti spoke on behalf of the UAPO, emphasizing that having a major street in St. Louis be called "George Floyd Divide" is but "one tiny step in the fundamental changes" necessary for remaking the US. The next "small step" is changing the street in Ferguson, Missouri which made the phrase "Hands Up, Don't Shoot" famous during 2014 demonstrations. One side of signs printed by the Green Party of St. Louis said "Rename Delmar Blvd. to George Floyd Divide" while the other side read "Rename W. Florissant Ave. to Michael Brown Jr. Ave."

The coalition to rename Delmar and W. Florissant agrees that our efforts are a critical component of a much greater goal of undoing colonial capitalism and replacing it with a society based on justice. That larger goal includes demilitarizing the police, reallocating massive over-funding of the police to necessary social services, ending economic and power divides that require violent suppression, and establishing community control over social problems which will lay the foundations for abolition of the police. Of course, addressing police violence in the US fits into even broader goals of undoing colonial domination throughout the world. We hope that others join us because what names we put on signs and what statues we build is at least as important as the old ones that come down.

Perhaps St. Louis should consider renaming another street after Anthony Lamar Smith, who was killed by cop Jason Stockley in 2011. When suppressed evidence surfaced in 2016 that the gun which Stockley claimed Smith pointed at him did not have the victim's DNA on it but did have the cop's DNA, Stockley was charged with his murder. On September 15, 2017 a judge found Stockley not guilty of any crime and set him free, which prompted demonstrations in St. Louis not seen since the murder of Michael Brown Jr.

What if we look back at all the police murders, all the post-Civil War lynchings, all the killings of slaves, all the Native Americans slaughtered for the theft of their lands, all the Latin American immigrant descendants of Native Americans who have been killed even though they have more claim to US soil than do European descendants, as well as every other person of color exterminated to enrich white rulers?

Listing all of these victims would both fill the pages of an encyclopedia and perhaps be enough to give a distinct name to each street, boulevard and rural road in the US. Would this be a fitting way to remind our descendants of the true American legacy every time they travel?

Of all the streets that could be renamed, one stands out as a reminder that the consolidation of finance capital is built upon America's ethnic cleansing. Do you remember Eric Garner, who was executed by New York cops for the crime of selling cigarettes? Has the hour arrived to rename NYC's Wall Street as "Eric Garner St.?"

A movie of the June 23, 2020 press conference co-sponsored by the Universal African Peoples Organization and the Green Party of St. Louis is available at this link.

Don Fitz ([email protected]) is on the Editorial Board of Green Social Thought where a version of this article first appeared. He was the 2016 candidate of the Missouri Green Party for Governor. His book, Cuban Health Care: The Ongoing Revolution, will be available in June 2020.