Green update from the EcoAction Committee 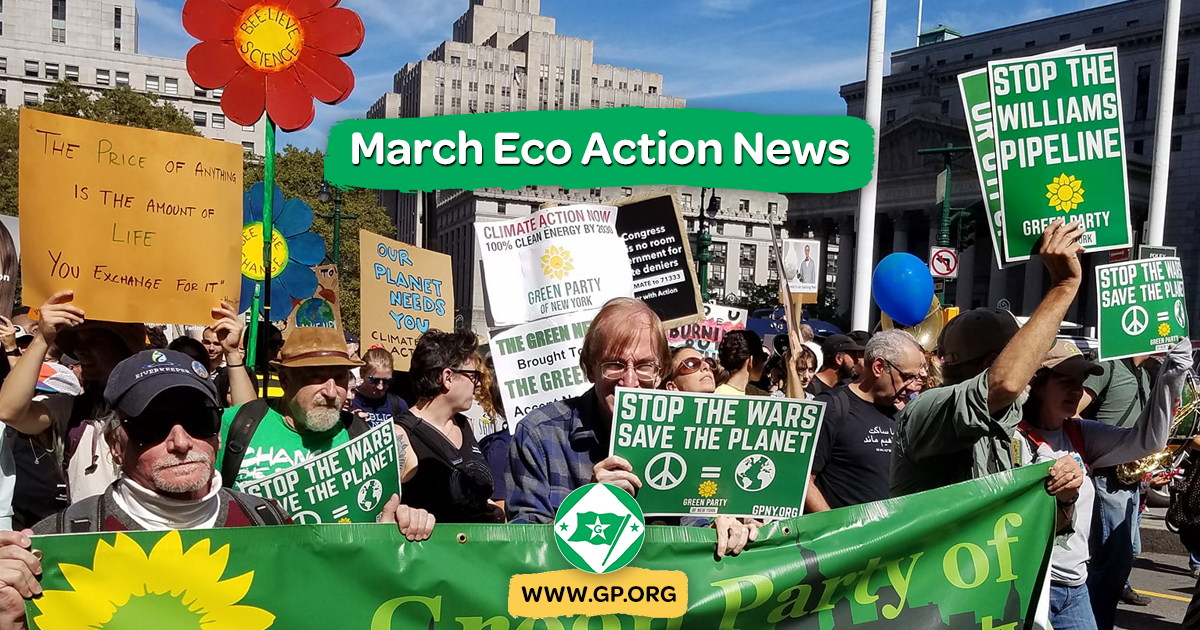 The forum was part of the Week of Action coordinated by the Build Back Fossil Free campaign, which builds upon the work of the ClimatePresident.org, whose platform we endorsed. The goal was to get the President to issue a series of Executive Orders on climate change, especially since strong climate legislation has little chance in Congress. Biden did put out a series of Executive Orders on climate. While some good stuff, many critical things were missing, especially re halting fossil fuels. See Green Party release.

The main climate initiative by Biden and the Congressional Democrats will be a $1 to $2 trillion green infrastructure economic stimulus. It is expected to be introduced in late March after the COVID relief package is done. The Democrats believe they can pass the stimulus through budget reconciliation which allows for the senate to pass with 50 plus the VP. The GP task is to push to get the stimulus to be green; get some funding for public ownership; knock out bad stuff; and, then impact upon how the funding is spent in local communities. The power players will push to fund false climate solutions / corporate greenwashing.

The THRIVEagenda.org is the framework, drafted by the Green New Deal Network.  THRIVE is more aspirational than detailed, focused on trying to direct money to EJ communities and for union jobs. Halting the acceleration of climate change is secondary. THRIVE avoids firm deadlines for emissions elimination, a halt to new fossil fuel infrastructure, or a phase out of existing fossil fuel uses. The GND Network is a standard democratic-lite coalition.

In addition to providing 40% of funds to disadvantaged communities, the stimulus needs a strong Just Transition to protect workers and communities presently dependent upon fossil fuels. It needs strong labor protections, such as the PRO (Protecting the Right to Organize) Act.

After a public campaign to stop 18 banks from providing $2.2 billion loan for Line 3 by March 31, the banks just announced they are instead going to provide a $800 million “sustainability” loan. Chase, Bank of America, Citi, TD Bank and Wells Fargo in the next few months still have loans worth $5.8 billion to Enbridge that are up for renewal. The campaign is urging groups to organize local protest actions.

(Register here) March 2, 2021 is the 5th anniversary of the murder of Berta Cáceres, who successfully organized against the Agua Zarca Dam in Honduras. Corporations are seeking to dominate energy production, including renewables as well as fossil fuels. This leads to loss of autonomy by communities in Latin America, Africa, and Asia and extensive environmental damage. Speakers include Nina Lakhani, author of Who Killed Berta Cáceres? Dams, Death Squads, and an Indigenous Defender’s Battle for the Planet; Dr. Don Fitz, Missouri Green Party; and, Tony Ndege, North Carolina Green Party.

Climate activists are organizing protests across the planet on March 19. Demands include: Governments, financial institutions, and companies must immediately end fossil fuel subsidies and immediately and completely divest from fossil fuels; Moratoria on all new fossil fuel projects should be imposed worldwide; Establish annual, binding carbon budgets based on the best available science,  limiting global heating to below 1.5°C.; and, Design climate policies that consider the welfare of workers and the most vulnerable in society. See Map of Actions.

"Greens of all ages must stand up and speak out against the capitalist corporations and governments that are destroying our planet for profit and power. The Youth of the Green Party of the United States stand in solidarity with other youth activists around the world, demonstrating their collective organizing power through this international day of Youth Climate Strike action.  We as Greens understand that when faced with capitalist ecological disaster, the only way to survive is Eco-Socialism." - Mike Gamms (he/him); Eco-Action Committee Secretary; Young EcoSocialist Caucus Alt. Delegate. Join the Young-Eco-Socialists of the Green Party: https://www.yesgp.org/join

Congressional CLEAN ACT on climate is a Dud

Mainstream Congressional Democrats have introduced the CLEAN Future Act in the House of Representatives, outlining their climate agenda.  It does call for 100% clean electricity by 2035 - which Biden already did by Executive Order. But overall it continues the weak goal of "net zero emissions" (80 to 85% reduction) by 2050.

Friends of the Earth called the bill's introduction "a monumental failure of climate leadership." "Chairman Pallone had over a year to remove fossil fuels from the CLEAN Future Act and didn't bother to reconsider, A clean energy standard that qualifies fracked gas is a joke. We need real solutions like solar and storage, not a dirty lifeline for gas, nukes, and biomass."