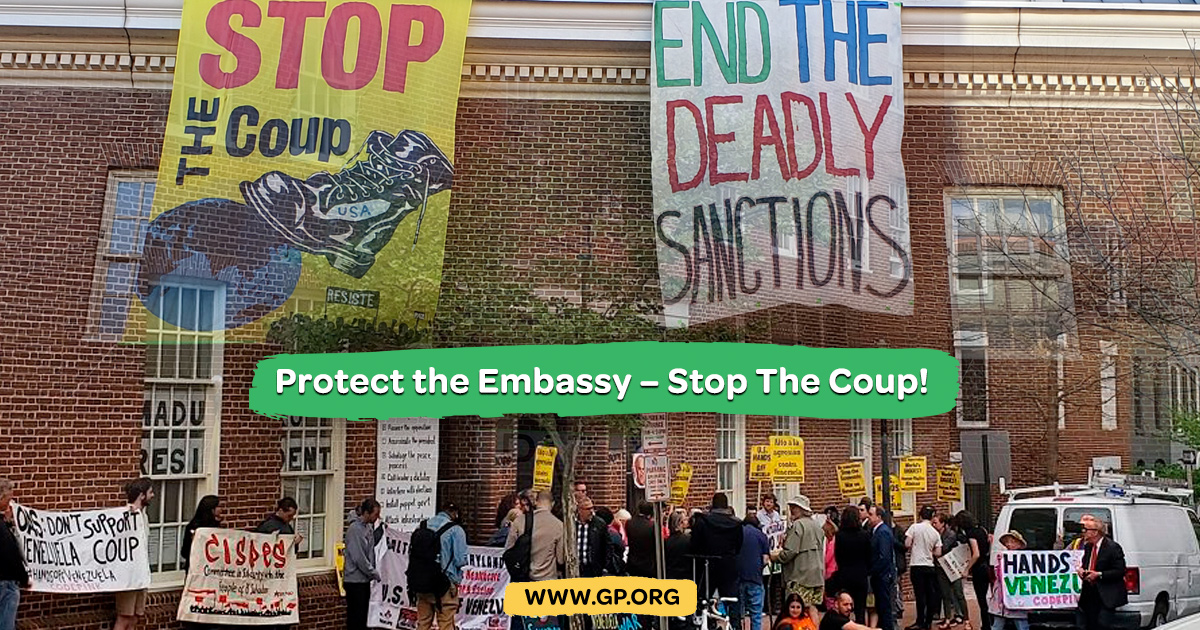 We are calling for a full mobilization of all people of conscience to join us on Saturday, April 27 at 2:00 p.m. at the Venezuelan embassy in Washington, D.C. We urgently request that all who can stay overnight on Saturday and/or all or part of Sunday.

The powerful mobilization of people across the country who came together at the Venezuelan embassy in Washington, D.C. Wednesday and Thursday has prevented the take over of the embassy by the Trump administration and their fraudulent puppet government. The Collective has exposed the illegal character of the Trump White House’s efforts to seize this diplomatic compound. The embassy, which is a building owned by the Venezuelan government and covered by the Vienna Convention, has been the scene of a 24 hour a day, 7 days a week vigil that has included rallies, teach-ins, and mobilizations by US peace and anti-war activists who are the invited guests of the Venezuelan government.

Last night Venezuelan Foreign Minister Jorge Arreaza told us in a video message that Venezuela appreciates the work of the Collective acting in solidarity with the Venezuelan people. Further, he stated the Collective has the full legal protection of Venezuela. The next day, the Trump administration unilaterally put in place sanctions. These illegal coercive measures by the United States are another violation of international law by the United State.

What has been accomplished in the last few days is a tremendous achievement in preventing the illegal seizure of an embassy of a sovereign country by the Trump administration. Every day that the embassy remains free from illegal seizure constitutes an important victory. But we have reached a new, critical juncture that will take place this weekend. With their unlawful actions fully exposed in the past two days, the Trump administration is re-calibrating. It is urgent that progressive people from all over the country join us this weekend starting at 2:00 p.m. on Saturday and continue this mobilization throughout the weekend. For those who can stay the night on Saturday night inside the embassy, we request that you fill out this form.

People power can stop the illegal actions of the Trump administration. Join this mobilization, share this message and urge others to join us at the embassy in Georgetown in Washington, DC, 1099 20th Street, NW.

Anti-war, peace and progressive activists who are inside the embassy are lawfully present as the invited guests of the Venezuelan government, the owner of the property. It has been the presence of all of these activists at the embassy that has prevented the Trump administration from carrying out this brazen act of piracy. We can do it again. We must do it again.

We have turned the illegal takeover of the embassy into a lose-lose situation for the Trump administration and their puppet fake government. If they obey international law and DC law and allow us to remain it is a victory for the Venezuelan people. If they illegally evict and arrest us the narrative will show the world embassies in the United States are not safe from US takeover as the Vienna Convention is being wantonly violated. The more people who join us, the stronger our victory and the greater the likelihood that the Trump administration will be stopped.

We are making history — each one of us can make a difference. If you are retired, if you have vacation time, if you can take the weekend off, if you have any availability please make it a top priority to come to Washington, D.C. this Saturday and Sunday and join the Embassy Protection Collective in this historic struggle to defend the sovereignty and independence of the people of Venezuela.

Fill Out This Form If You Can Help Protect The Embassy

By The Embassy Protection Collective, Popular Resistance
April 26, 2019
Kevin Zeese and Margaret Flowers are among those occupying the Venezuelan Embassy.
Do you like this post?
Tweet