Want Progressive Government in Maryland? Vote Green Party Up and Down the Ballot 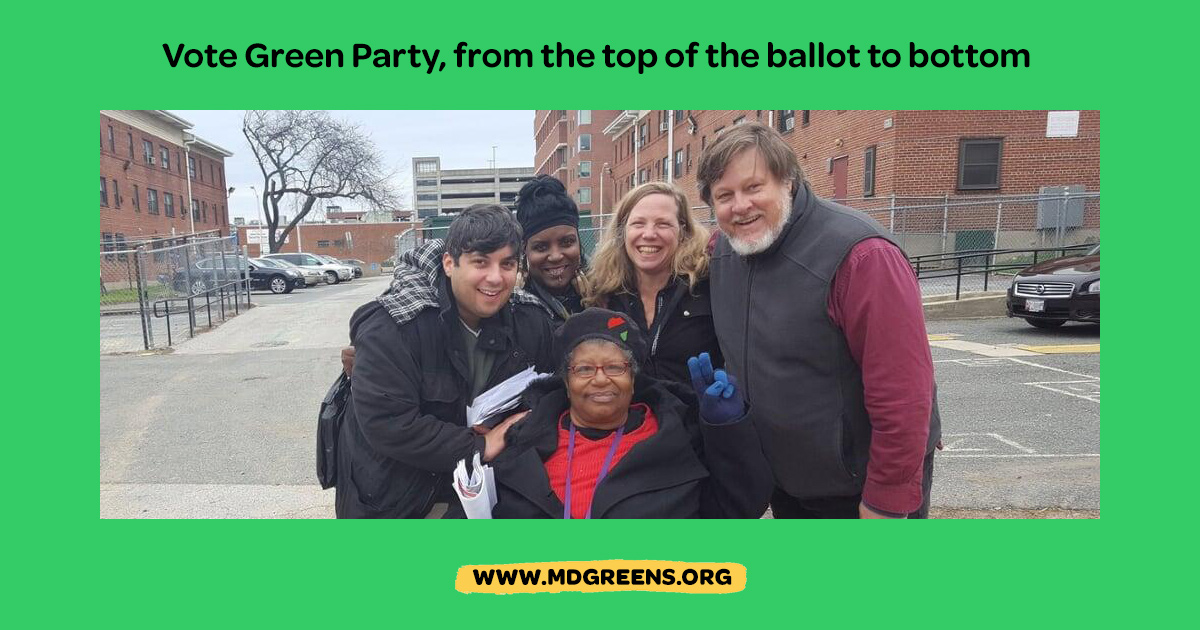 The Goucher poll gives Gov. Larry Hogan (R) a 22 percent lead over Democrat Ben Jealous. This dismal result expands by 6 percent Hogan’s lead from an Aug. 14 Gonzalez poll, which had him ahead 52 percent to 36 percent.

If Jealous is able to cut Hogan's lead in half he will still lose by a landslide. Without a major surprise it is hard to see Jealous doing better than shrinking his loss to a landslide from a complete blowout.

The Democratic Party establishment is Jealous' biggest problem. They abandoned him as soon as he defeated the party's machine candidate.

How much money has Sen. Chris Van Hollen raised for Jealous? How much has he moved from his campaign account to the Jealous campaign? How about Sen. Ben Cardin? House Democratic Whip Steny Hoyer? Senate President Mike Miller? Speaker of the House Michael Busch?

Keep going down the list, you will find almost no Democrats helping their nominee. The Democratic Party abandoned Jealous and now claim to be surprised he is losing. That is like knifing someone in the back and being surprised they are bleeding.

When the Republican Governors Association attacked Jealous, defining him as a tax and spend socialist -- a false description that has stuck -- what did the Democrats do to respond? Nothing. They allowed the Republicans to define Jealous and left him defenseless. Hogan got in the head of Ben Jealous and when Jealous was asked by a reporter if he was a socialist, he responded in anger, swearing with an F bomb and the counterproductive self-definition of himself as a venture capitalist.

Has anyone in the Democratic Party done the opposition research about the ongoing Hogan real estate company -- which he has not put in a blind trust -- that has entered into many new contracts and made the governor $2.4 million, on top of his $180,000 official salary? Research on that one issue could transform the campaign.

State Sen. Kathy Klausmeier, a deputy majority leader, sent out a mailing Sept. 11 praising Hogan and paid for by the Democratic Senate Caucus. The mailer said she and Hogan were working for the same goals even though they were from different parties. This led Mark McLaurin, political director at Service Employees International Union Local 888, to write on Twitter: “We’re using Caucus funds to boost Hogan???!!?!?!”

Klausmeier, the deputy majority leader is campaigning for Hogan. Has she done a mailing for Jealous? Have any Democratic Party leaders done any mailings for Jealous?

Jealous has made a lot of mistakes, like his decision to not attend the meeting of all Maryland county officials in Ocean City and multiple errors showing him to be a carpetbagger from out of state, so he deserves blame for his failing campaign. But the Democratic Party is undermining his campaign by abandoning him. Now Democrats are using it as an excuse they can claim Jealous is doing poorly seeing they need to distance themselves from him.

The Maryland Democratic Party is a centrist party that is funded by big business, developers, real estate and the insurance industry. That is who they serve. They can manage Hogan. The General Assembly sets the legislative agenda. They pass whatever laws they want. If Hogan vetoes it, they override it.

Why do they need a governor who defeated the machine in office? It is much better to use Jealous to teach a lesson to other Democrats -- don't challenge the machine, be a centrist.

The reality is if people want progressive government they are not going to get it from the Democratic Party. People need to build an alternative party that puts the people's necessities and protection of the planet before the profits of campaign donors.

The only party that will do that is the Green Party.

People need to use their vote to help build that party -- voting Green for governor and lieutenant governor -- Ian Schlackman and the Rev. Annie Chambers -- as well as voting Green down ballot. We will not get progressive government from the Maryland Democratic Party. Democrats are proving they serve their donors, not their voters in the gubernatorial election for those who did not already know it.

Progressive voters need to send Democrats a message: ‘Do not take us for granted.’”


Kevin Zeese is co-director of Popular Resistance and on the coordinating council of the Maryland Green Party.