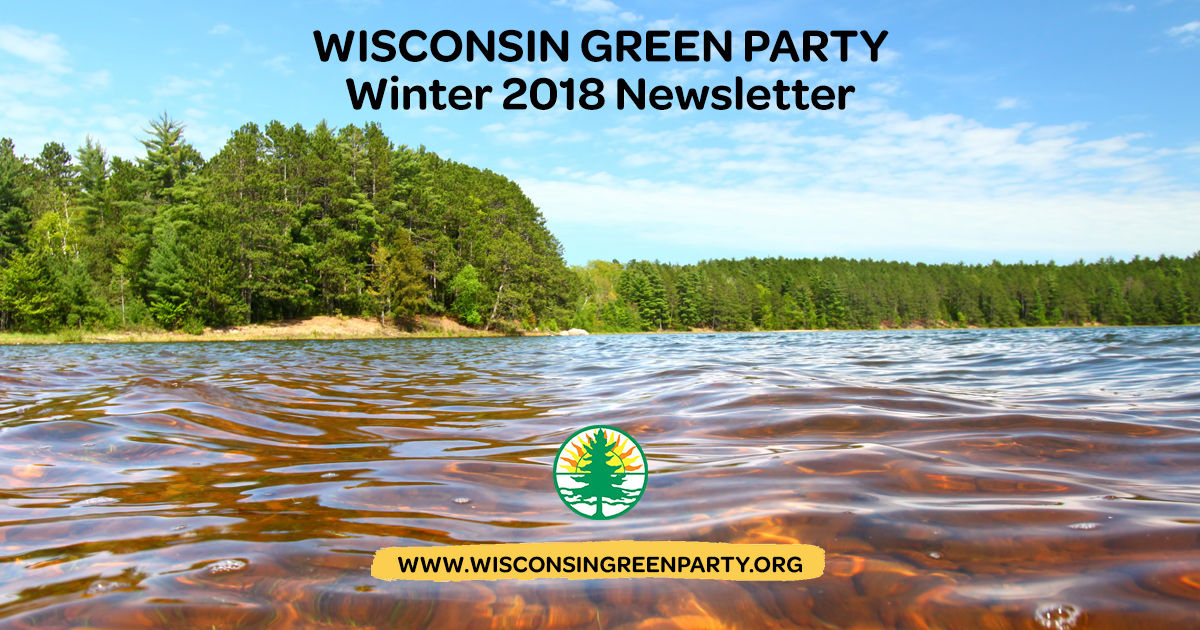 The Wisconsin Green Party has been busy since our Fall Gathering in Muskego. One of the first steps we took, after electing new officers and adding more active members to our committees, was to convene a Structure Team to address some of the structural issues that have held our party back from greater growth and effectiveness. The Structure Team's first task was to propose substantial revisions to our bylaws, which are presented in this newsletter for our members to review.

We also decided to host a Green Campaign Training School, which will be held in Milwaukee on April 7th. Our goal is to set a new standard for training in the knowledge and skills to run an effective campaign, both for Wisconsin Greens and for our fellow parties throughout the country. Our Spring Gathering will be held the following Saturday April 14th in Stevens Point, where Greens from across the state will have the chance to decide on candidates endorsements, bylaws revisions, platform amendments, and more.

Candidates have started to come forward to declare their intention to seek Green Party support in upcoming elections. Meanwhile, our Elections Committee has created an updated endorsement policy, and is working to recruit candidates and facilitate the endorsement process. The Membership Outreach, Communications, Platform and IT Committees have also been active. The Finance Committee, however, is in need of a new chair after our previous chair stepped down.

In short, during the period between major elections our party has been getting more organized and building our capacity as a grassroots alternative to the corporate parties. We could still use more help though! Read through this newsletter for ways to get involved with the party for people, planet and peace over profit.

Learn to Lead at our Green Campaign Training School!

The Wisconsin Green Party is hosting a one day Green Campaign Training School on Saturday April 7th in Milwaukee for anyone who is interested in running for office as a Green or working on a Green campaign. We highly encourage people who are planning to run for office ( or considering a campaign) to attend together with their prospective campaign managers and other key team members. The campaign school is also open to anyone who wants to support Green campaigns and would like to gain the skills and knowledge needed to be an essential part of a campaign team.

The curriculum of this intensive day-long
training will include:
• how to plan for a winning campaign
• developing a campaign strategy
• assembling a campaign team
• the roles of the candidate and campaign manager
• defining a message
• getting the message out
• budgeting and fundraising
• technology and social media
and more.

The Green Party seeks to empower regular people to run for office and break down the barriers that prevent people from taking part in politics, government, and the decisions that affect our daily lives. To that end, this campaign school will be free and open to the public. Greens from outside Wisconsin are welcome as well. Although participation does not necessarily imply Green Party support, information will be provided to participants about the process for seeking Green Party

The Green Campaign Training School will be held on Saturday April 7th from 12 noon to 8 pm at the First Unitarian Society at 1342 N Astor Street, Milwaukee. The event will be livestreamed and recorded. For maximum benefit, we recommend that prospective candidates and their team members attend in person. Attendees should register as soon as possible so that organizers have ample time to make arrangements and send important information. Refreshments, coffee and tea, and a late lunch will be provided on-site (with a $5 donation requested to cover food costs).

Contact WIGP co-chair Dave Schwab at [email protected] if you have any questions. Mark your calendar and don't miss this opportunity to learn how to lead the way to a better world!

The Wisconsin Green Party will hold our 2018 Spring Gathering statewide membership meeting in Stevens Point on Saturday, April 14th. We encourage all Greens to attend and make your voice heard on important decisions for our party, including candidate endorsements in 2018 elections.

With elections for state legislature, Congress, Governor and other state constitutional offices coming up this November, the Spring Gathering is the time when Wisconsin Greens can weigh in on endorsement decisions in these important races. We also have other critical decisions to make, including a major revision of our party's bylaws, and a major update of our platform (see other articles in this newsletter for more information).

Check the Spring Gathering announcement on www.wigp.org for additions to the agenda and other updates. Everyone is welcome to attend. To participate in decision-making, you should be a dues-paying member in good standing of the WI Green Party - check www.wigp.org/join for more information.

At the heart of Central Wisconsin Greens territory, Stevens Point is an excellent location for Greens from every corner of the state to meet. Saturday's membership meeting will be hosted at the University of Wisconsin - Stevens Point by the UW-SP College Greens. On Sunday April 15th, members of the state Coordinating Council will meet at a venue to be determined in Stevens Point.

See you in beautiful Stevens Point on April 14th!

Have you thought about running for office? Even if you haven't, consider the following: Americans have never been closer to rebellion against the political establishment. National polls show that a record high 61 % of Americans - including 71 % of millennials - agree that the establishment parties are failing us, and that we need a new major party.

With elections coming up, now is a great time to think about running for office as a Wisconsin Green to help build the movement for people, planet and peace over profit.

We will be holding a Green Campaign Training School on April 7th in Milwaukee for prospective candidates, campaign managers, and anyone who would like to gain the skills and knowledge needed to be an essential part of a successful campaign.

The need has never been greater for real solutions to the urgent problems in our communities and our world, many of which are boiling over into full-blown crises. The establishment parties are moving us in the wrong direction. Neither corporate-funded party is demonstrating the values and vision we need to revolutionize American politics.

There's never been a better time for people of integrity to join together and build the new major party our country so desperately needs. The Green Party can seize this moment to bring about the transformation we need at every level: in our local, state, and federal governments, our economy, our society, and our relationship with the Earth we depend on.

The Greens are the only national party with a consistent stand against corporate money in politics, and a platform that could unite millions in a new populist progressive movement. In today's political climate, a rising party that empowers regular people to run for office to fight for the people - not lobbyists or corporate PACs - has the potential to catch fire.

But political movements don't build themselves. We need candidates who are willing to stand up and carry the Green banner. Win or lose, every Green campaign plants the seeds of future victory, by bringing Green values into the mainstream, challenging establishment politicians to answer for their failures, and recruiting new members into the movement - including future candidates and elected officials.

At the local level, Greens in Wisconsin have won over 50% of the races they've entered. Running more candidates at all levels will not only make a difference in our communities, it will also help build the critical mass we need to win higher office and turn our values of peace, justice, democracy and ecology into reality.

A shocking number of elections go uncontested, which means even more opportunities for concerned citizens to make an impact. We are particularly eager to recruit candidates to run for Secretary of State and State Treasurer. In past years, strong showings in these races have helped the Wisconsin Green Party to maintain ballot access and party status.

If you're willing to consider running for office to build the movement for people, planet, and peace, the Wisconsin Greens want to talk with you!

Let us know you're considering a run for office at www.wisconsingreenparty.org/run_for_office and we'll get in touch about the next steps.

The Wisconsin Green Party will decide what candidates we will endorse at our Spring Gathering in Stevens Point on April 14. The period for gathering signatures to get on the ballot begins April 15.

Building a bridge to the better world we know is possible begins whenever you're ready.

We need your help!

Since the 2016 election cycle, the Wisconsin Green Party has been getting progressively more active and organized. In addition to our local chapters and campaigns, much of this activity on the state level is taking place in our committees: elections, membership outreach, communications, platform, finance, and information technology.

If you'd like to help the WI Greens build our capacity to support electoral and issue campaigns and create a world of peace, justice, democracy and ecology, please take a look at our committees at http://www.wisconsingreenparty.org/committees and let us know how you might want to help.

If you're interested in getting involved but aren't yet sure how, please come to our Spring Gathering on April 14th in Stevens Point to learn more about what the Green Party is doing and how you can help.

In November 2017, the Wisconsin Green Party Structure Team began work on reforms to the structure of the state party. The first of these was a process of proposing substantial amendments to the party's bylaws, currently known as the Constitution of the WI Green Party. The state party's coordinating council has reviewed these proposed amendments, and recommended by consensus that they be considered for approval by the party membership at the 2018 Spring Gathering.

While these amendments are presented as a whole, if members wish to discuss concerns about particular sections and vote on them separately, they may call for a motion to do so.

The text of the amendments are available as a PDF.