Greens take historic step to form as National Party, file with the FEC 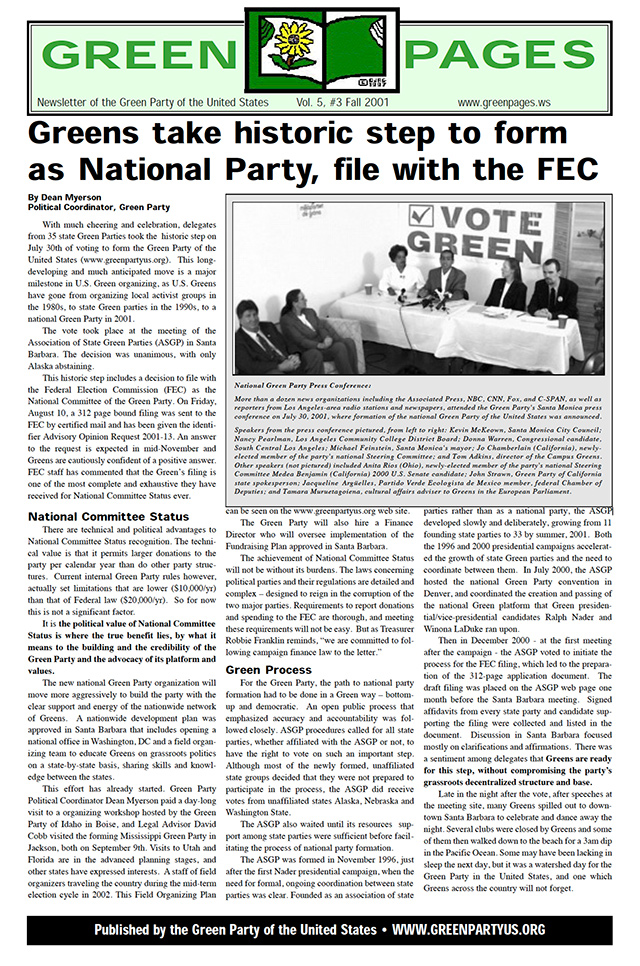 With much cheering and celebration, delegates from 35 state Green Parties took the historic step on July 30th of voting to form the Green Party of the United States (www.greenpartyus.org). This longdeveloping and much anticipated move is a major milestone in U.S. Green organizing, as U.S. Greens have gone from organizing local activist groups in the 1980s, to state Green parties in the 1990s, to a national Green Party in 2001.

The vote took place at the meeting of the Association of State Green Parties (ASGP) in Santa Barbara. The decision was unanimous, with only Alaska abstaining.

This historic step includes a decision to file with the Federal Election Commission (FEC) as the National Committee of the Green Party. On Friday, August 10, a 312 page bound filing was sent to the FEC by certified mail and has been given the identifier Advisory Opinion Request 2001-13. An answer to the request is expected in mid-November and Greens are cautiously confident of a positive answer. FEC staff has commented that the Green’s filing is one of the most complete and exhaustive they have received for National Committee Status ever.

There are technical and political advantages to National Committee Status recognition. The technical value is that it permits larger donations to the party per calendar year than do other party structures. Current internal Green Party rules however, actually set limitations that are lower ($10,000/yr) than that of Federal law ($20,000/yr). So for now this is not a significant factor.

It is the political value of National Committee Status is where the true benefit lies, by what it means to the building and the credibility of the Green Party and the advocacy of its platform and values.

The new national Green Party organization will move more aggressively to build the party with the clear support and energy of the nationwide network of Greens. A nationwide development plan was approved in Santa Barbara that includes opening a national office in Washington, DC and a field organizing team to educate Greens on grassroots politics on a state-by-state basis, sharing skills and knowledge between the states.

This effort has already started. Green Party Political Coordinator Dean Myerson paid a day-long visit to a organizing workshop hosted by the Green Party of Idaho in Boise, and Legal Advisor David Cobb visited the forming Mississippi Green Party in Jackson, both on September 9th. Visits to Utah and Florida are in the advanced planning stages, and other states have expressed interests. A staff of field organizers traveling the country during the mid-term election cycle in 2002. This Field Organizing Plan can be seen on the www.greenpartyus.org web site.

The Green Party will also hire a Finance Director who will oversee implementation of the Fundraising Plan approved in Santa Barbara.

The achievement of National Committee Status will not be without its burdens. The laws concerning political parties and their regulations are detailed and complex – designed to reign in the corruption of the two major parties. Requirements to report donations and spending to the FEC are thorough, and meeting these requirements will not be easy. But as Treasurer Robbie Franklin reminds, “we are committed to following campaign finance law to the letter.”

For the Green Party, the path to national party formation had to be done in a Green way – bottomup and democratic. An open public process that emphasized accuracy and accountability was followed closely. ASGP procedures called for all state parties, whether affiliated with the ASGP or not, to have the right to vote on such an important step. Although most of the newly formed, unaffiliated state groups decided that they were not prepared to participate in the process, the ASGP did receive votes from unaffiliated states Alaska, Nebraska and Washington State.

The ASGP also waited until its resources support among state parties were sufficient before facilitating the process of national party formation.

The ASGP was formed in November 1996, just after the first Nader presidential campaign, when the need for formal, ongoing coordination between state parties was clear. Founded as an association of state parties rather than as a national party, the ASGP developed slowly and deliberately, growing from 11 founding state parties to 33 by summer, 2001. Both the 1996 and 2000 presidential campaigns accelerated the growth of state Green parties and the need to coordinate between them. In July 2000, the ASGP hosted the national Green Party convention in Denver, and coordinated the creation and passing of the national Green platform that Green presidential/ vice-presidential candidates Ralph Nader and Winona LaDuke ran upon.

Then in December 2000 - at the first meeting after the campaign - the ASGP voted to initiate the process for the FEC filing, which led to the preparation of the 312-page application document. The draft filing was placed on the ASGP web page one month before the Santa Barbara meeting. Signed affidavits from every state party and candidate supporting the filing were collected and listed in the document. Discussion in Santa Barbara focused mostly on clarifications and affirmations. There was a sentiment among delegates that Greens are ready for this step, without compromising the party’s grassroots decentralized structure and base.

Late in the night after the vote, after speeches at the meeting site, many Greens spilled out to downtown Santa Barbara to celebrate and dance away the night. Several clubs were closed by Greens and some of them then walked down to the beach for a 3am dip in the Pacific Ocean. Some may have been lacking in sleep the next day, but it was a watershed day for the Green Party in the United States, and one which Greens across the country will not forget.