EcoAction wants you to Organize for Earth Day to May Day 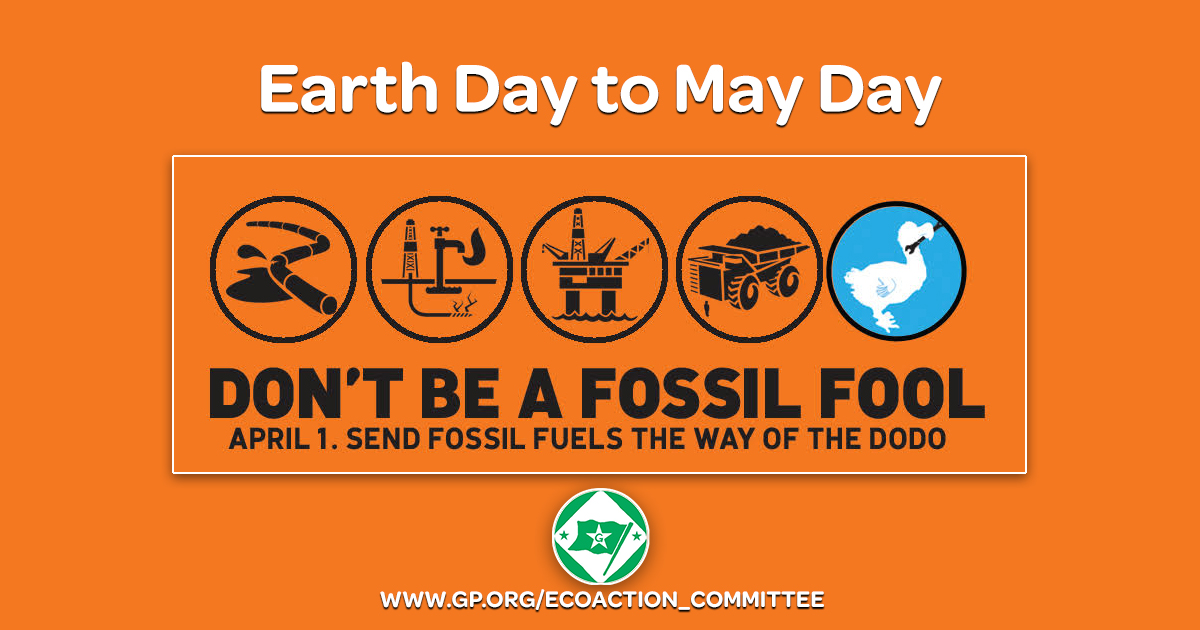 EcoAction is encouraging Greens to organize and participate in Earth Day to May Day (EDMD) activities. Please contact EcoAction ([email protected]) if your Green Party is sponsoring any events, actions, webinars around EDMD so we can include in our calendar. EcoAction will hold a webinar on April 11 outlining ways to participate in EDMD during its regular monthly meeting on the second Monday of the month at 9:00 PM ET.

The goal of EDMD is to highlight the connection between labor, climate action, peace and the rights of people and planet, including immigration and BLM. We want to work in collaboration with the many movements working for fundamental system change. Our themes this year are an Ecosocialist Green New Deal, the Rights of Nature, and A Goal of Real zero emissions by 2030. We need to end wars for fossil fuels by halting their use and transitioning to clean, renewable energy.

You can also check out what GPAX is promoting. https://earthdaystrike2022.org

Help EcoAction promote some April Fools social media and press releases on April 1, including an end to war for fossil fuels. Or suggest your own Fossil Fool themes / memes to [email protected]

To find / join / organize a local event near you, check out their global map.

The catastrophic climate scenario that we are living in is the result of centuries of exploitation and oppression through colonialism, extractivism and capitalism, an essentially flawed socio-economic model which urgently needs to be replaced. A system where rich nations are responsible for 92% of global emissions, and the richest 1% of the world population are responsible for double the pollution produced by the poorest 50%. Guided by historical struggles and lived experiences, led by the most affected people and areas (MAPA), we are demanding climate reparations.

No More Wars for Fossil Fuels

On Thursday March 3 in at least 60 cities Fridays for the Future held rallies to say stop the war in Ukraine, end fossil fuels. “We’re seeing that climate justice and the call for peace has never been more intertwined than now, as we’re seeing a war being fought funded by fossil fuel exports taking people’s lives away. So, for us, we know that there will be no real freedom or sustainable peace anywhere as long as there’s dependency on fossil fuels, and at the same time we need emergency help for Ukrainians.’ Many other climate activists have raised the same point.

The Green Party issued a similar release, stressing that the US and other countries should be working together to combat climate change instead of fighting over resources that gain profits for the multinational corporations. “Let’s not fool ourselves, this is also about control of resources and riches among world powers,” said Margaret Elisabeth, Green Party US National Co-Chair. “Putin wants to preserve Russia’s natural gas exports while the US wants control over Europe’s spigots, and Europe teeters between desire for cheap and available gas and the need to move away from fossil fuel energy sources. Fossil-fuel addiction is so intense that superpowers are still willing to go to war over it instead of kicking the habit to save the planet. We need a global Green New Deal to move away as quickly as possible from fossil-fuel addiction.”

At this month’s meeting, EcoAction discussed how to respond to the call by many politicians to respond to the price gouging by fossil fuel companies by cutting various gas taxes (the revenues which fund many vital programs). An alternative suggestion would be to impose a surtax on oil companies and distribute a dividend to low-and-middle income consumers to help offset the price hike. High gas prices do encourage less use of fossil fuels and the switch over to public transit. Some would also suggest that this would be a good time to just nationalize all the oil and gas companies so that we can plan their rapid shut down, while also removing the artificial fuel price inflation we have seen evidence of in the past few months.

"While millions of Americans are struggling with high prices at the pump, Big Oil is making a killing," said Jamie Henn, a spokesperson for the "STOP: Stop the Oil Profiteering"  campaign. A project of the nonprofit Fossil Free Media, the campaign has already projected messages including "Big Oil Is Making a Killing Off of War" and "Stop Big Oil Profiteering" near the U.S. Capitol in Washington, D.C. (see article.)

Sign on to the Banking on Climate Chaos Report

The annual Banking on Climate Chaos report exposes banks for their financing of fossil fuels. Last year's edition was endorsed by over 300 organizations from around the world, and has since been used by activists, politicians, climate strikers, the media, concerned bank shareholders, and many more to call out banks for their financing of climate destruction and call on regulators to take action and end this deadly support.

This year's report will be published on Wed, March 30, and is written by lead authors from Oil Change International, BankTrack, Indigenous Environmental Network, Rainforest Action Network, Reclaim Finance, Sierra Club, and urgewald.  Please fill out this form if you're interested in endorsing the report.

EcoAction was one of more than a thousand groups that sent a letter before President Biden’s State of the Union on March 1, once again urging him to declare a climate emergency and issue a host of Executive Orders to combat climate disruption and keep fossil fuels in the ground. His speech was delivered the day after the IPCC released a new report that the dangers of climate change are mounting so rapidly that they could soon overwhelm the ability of both nature and humanity to adapt unless greenhouse gas emissions are quickly reduced.

Biden once again refused to become a climate president, largely ignoring climate by spending less than a minute mentioning it. Democrats continue to insist that coal-owning Senator Manchin, who the Democrats have kept as chair of the Senate Energy Committee, after more than a year of delay and opposition will almost assuredly someday soon agree to some version of Build Back Smaller and Slower to fund an ever-shrinking inadequate package of climate and social spending initiatives.

The Congressional Progressive Caucus on March 17 joined the call for the president to declare a climate emergency and take executive action.