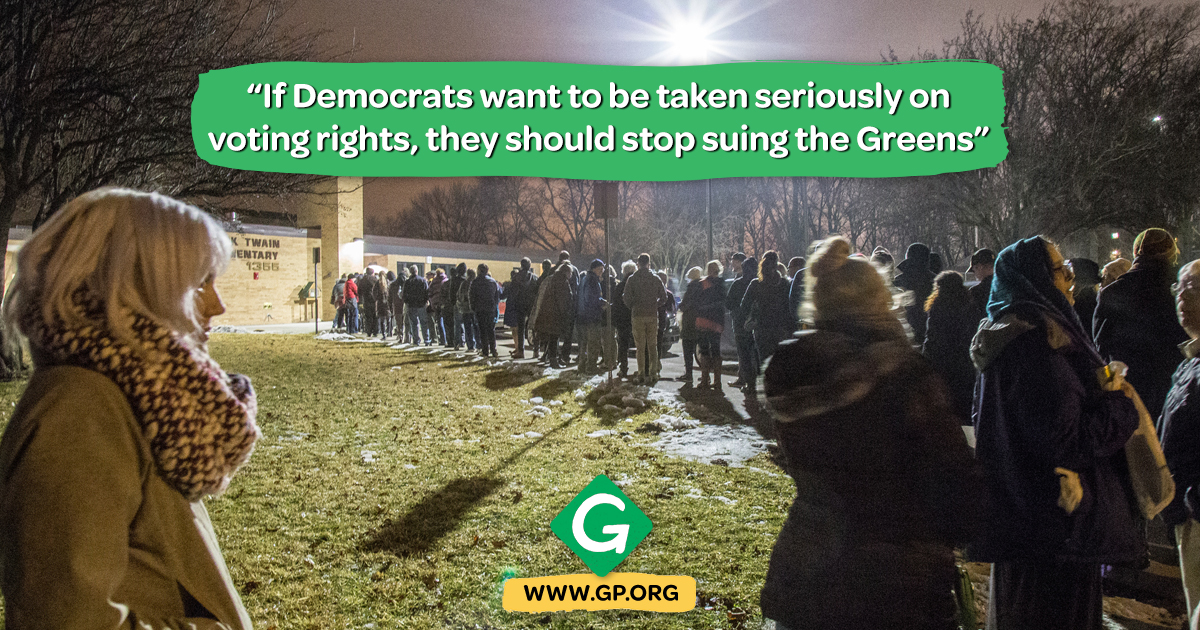 The Democratic Party sued to remove 2020 Green Party presidential candidate Howie Hawkins from the ballot in Pennsylvania over a technicality; the state Supreme Court, whose members are chosen through partisan elections, ruled in the Democrats' favor along party lines. Democrats also got the Greens removed from the ballot in Wisconsin because vice-presidential candidate Angela Walker, a Milwaukee native, listed two addresses on her ballot petition. She said she moved during the signature-gathering process.

The Greens appeared on 28 state ballots in 2020, down from 44 in 2016. The decline was in large part due to Democratic lawsuits. The effort extends down the ballot as well. In 2020 Democrats blocked Green Party nominees for the U.S. Senate, House and railroad commissioner from appearing on the ballot in Texas. Montana Democrats sued to remove all Greens from the ballot in 2018 and 2020.

"They are nothing but playground bullies desperately seeking exclusive power," Gary Marbut, a Green Party candidate for Montana's Senate, said in 2020. "As soon as it suits them they claim the ballot is their exclusive playground and do their best to run anyone else they can off the playground, especially the little kids."

Democratic-aligned media outlets turn a blind eye to these antidemocratic tactics, while accusing Republicans of covertly gathering petition signatures and providing legal assistance to defend the Greens from Democratic lawsuits that seek to keep them off the ballot.

True, Republicans have waged warfare against the Libertarian Party, repeatedly suing to keep such candidates off the ballot out of fear that they would siphon off votes from the GOP. But the Republicans aren't posing as staunch defenders of free access to the polls. If Democrats want to be taken seriously on voting rights, they should stop suing the Greens.

Mr. Rall is a political cartoonist, columnist and author, most recently, of “The Stringer.”