These Green Candidates to Watch are AMAZING! 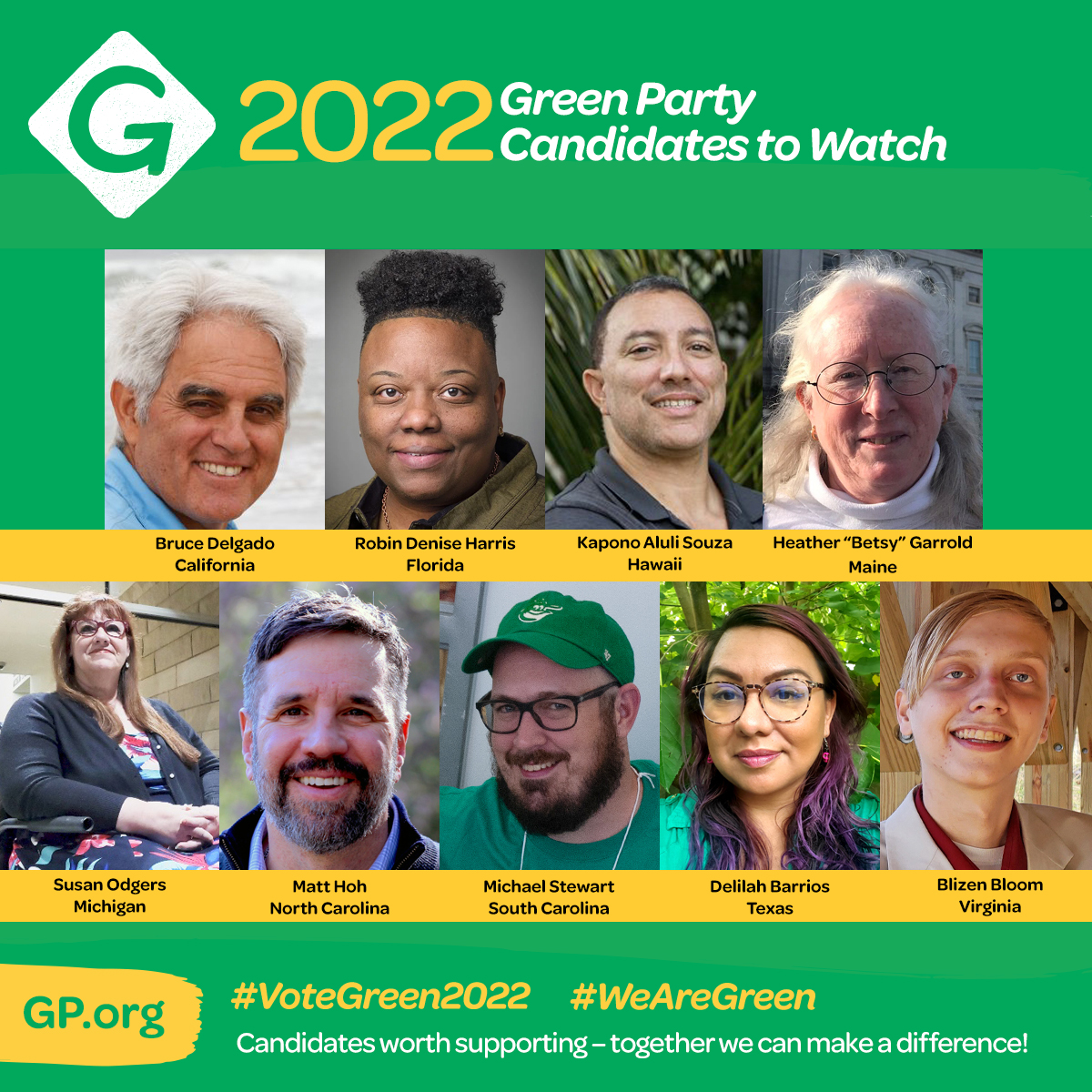 The Green Party stands for Peace, Justice, and an Ecological future. Corporate media outlets pour billions into convincing us that these basic things are an impossible pipe dream however history has always taught us otherwise. The foremost principle that unites us is our uncompromised support for Grassroots Democracy. Greens understand that there is no top-down approach to achieving a better world.

In the end there is no lesser evil in matters of life and death. Matters of global war and peace. Matters of a sustainable planet or environmental collapse.

The Green Party US has firmly planted itself at the cutting edge of real substantive change. Whether it’s fighting for necessary a no-compromise *Real* Green New Deal, student debt cancelation or being the first national party to support same sex marriage and the Equality Act our party has always remained future focused by pushing the politics and solutions of our communities and our society forward. Something the duopoly has consistently failed to do.

Our fantastic roster of 2022 candidates is no exception! Several candidates would not have been on the ballot without generous grants from GPUS. Please give today to provide even more essential resources to our future candidates and state parties!

Here are just a few of many great GPUS Candidates to Watch:

Delgado is the longest serving elected or appointed Green mayor in U.S. history and is running unopposed for his fourth term. He’s served 14 consecutive years as Mayor of Marina since 2008, and when added to his previous service on the City Council, he will have the third most years of any Green in office after he starts his next term. He also serves in an important appointed position on the Central Coast Regional Water Quality Control Board.

Harris is a community activist and organizer running against a Democrat with no Republican in the race. Endorsed by Florida Rising, a statewide voting rights and grassroots organizing group, her key issues include medical, environmental and reparatory justice, affordable housing and supporting residents impacted by Hurricane Ian. Harris got 24.8% of the vote in her 2018 race for County Commissioner.

Souza is a Lomilomi practitioner and professional myofascial therapist who was born and raised in Kailua. If elected he will call for a limited constitutional convention to prioritize the needs of Hawaii residents. His priorities include initiating universal health care, including preventative, mental, primary, vision, and dental, teaching Hawaiian language in all classes and grade levels, expanding student loan forgiveness in exchange for service and employment, increasing renter’s credits, and decommissioning redundant military bases.

Garrold is running in District 38, a newly consolidated district of 8½ towns in Waldo County, a rural area where she grew up. Garrold’s issues include food sovereignty, Medicare for All, local governance through home rule, mitigation of climate change, campaign finance reform, and ranked choice voting.

Susan Odgers, one of seven candidates for two spots on the Wayne State University Board of Governors

Odgers is a Wayne State alumna. She opposes facial recognition technology on campus, supports a program for a major or minor in LGBTQ studies and supports adding an additional spot on the university board of governors for a WSU student to represent the student body.

Hoh is Former marine who served three tours before resigning from the State Department in 2009 over the surge of troops to the war in Afghanistan. Hoh won a high-profile legal battle against the state elections board's Democratic majority when a U.S District Court judge ordered the board to place Hoh on the ballot. His top priorities will be supporting a real Green New Deal, ending the wars and bringing the war dollars home, raising the federal minimum wage to a living wage, supporting development of worker and community cooperatives and creating democratically run public banks and utilities, among other issues.

Stewart is running unopposed for reelection as a commissioner. He is currently serving as Chair of the Board and West Piedmont Director. Stewart is one of eleven candidates currently serving on water boards across the country, and seven, including Stewart, are running in November. This is an office that Greens are drawn to because of the instability of the water supply in a world impacted by climate change.

Barrios supports Medicare for All and will focus on bringing medical care to everyone living in Texas. Her primary issues are patient rights, including the right to abortion, environmental justice, medical marijuana, a living wage and universal basic income, and publicly owned utilities. She endorses community justice where people call advocates for support instead of the police, and would defund the police and divert the money to other sectors like clinics and libraries that can offer better support to families and especially children.

Bloom helped form and co-lead the Virginia chapter of State of the Students, a non-partisan, youth-led organization dedicated to engaging young people with the government. If elected, they will increase transparency and include those most impacted in board decision making. They have called on the current School Board to solicit more feedback through surveys and focus groups as well as setting up advisory boards composed of ordinary citizens. They oppose a proposed policy to centralize review of textbooks.

2022 Green Party candidates and officeholders have been on the forefront by focusing on issues the other parties have neglected or opposed, including:

We wish all of these candidates the best of luck on Election Day tomorrow! Thank you for ensuring that we have many more fantastic candidates in future years to come.