FALLS CHURCH, Va – Dear Berners, the Green Party of Virginia welcomes you! This country and the planet need you.

Many of us in the Green Party are former Sanders supporters. In 2016 when Bernie endorsed Hillary Clinton, we left the Democratic party and joined the Greens. We were grateful there was a party to turn to that was standing up for everything we had worked and hoped for at a time when we were feeling politically lost.

Governor Murphy: extend democracy to the Green, Libertarian, Socialist Parties and all independent candidates during this crisis

TRENTON, NJ – The Covid-19 crisis continues to unravel and put a heavy strain on our society, critical medical care system and overall resources. On March 19th, Governor Phil Murphy signed Executive Order No. 105, allowing for Democratic and Republican Parties to submit their petitions online, in addition to in person, and the Secretary of State to create an online form that allows voters to submit their signatures on petitions electronically.

The Green Party of New Jersey is a political party seeking ballot access for races this November. We are facing the same dilemmas the two mainstream parties faced recently with regards to collecting ballot petitions and signatures. We have two candidates Madelyn Hoffman, Hoffman For Senate and Craig Cayetano,  Cayetano4council Hawthorne Ward, that are campaigning for the general election on November 2nd, and will be petitioning for our presidential candidate.

PITTSBURGH – Much of politics is based on personal interactions, but in the midst of a global pandemic, such interactions can be potentially deadly. The COVID-19 outbreak has left third parties in Pennsylvania out in the cold, concerned that they may not be able to get on the ballot for key races in November due to an inability to collect signatures.

NEW PALTZ, NY — Green Party officers condemned the unprecedented legal action by the Democratic National Committee that seeks to prevent the New York State Board Of Elections from exercising its lawful function of ruling on the specific objections local Democrats filed to the petition of Green candidate Steven Greenfield, of New Paltz, in New York's 19th Congressional District. The Party said the Democratic Party had issued a similar legal notice to its candidate Harry Burger in New York’s 2nd Congressional District.

Greens Call For Solidarity With Labor Amid COVID-19 Crisis 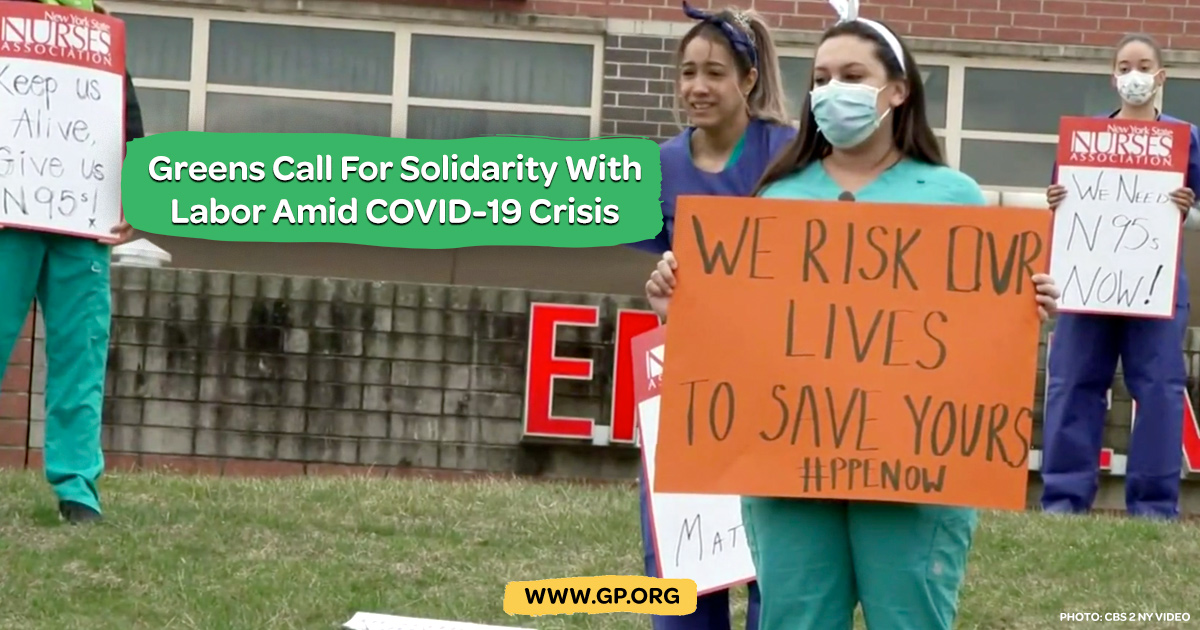 Green Party leaders called today for people’s movements and organizations to stand in solidarity with workers facing health concerns, loss of wages and insufficient healthcare during the Covid-19 pandemic.

“This must be a top priority for all who are dedicated to human rights, racial and economic justice, the well-being of working people and the poor, and the environment,” said Green Party of the United States Co-Chair Justin Beth. 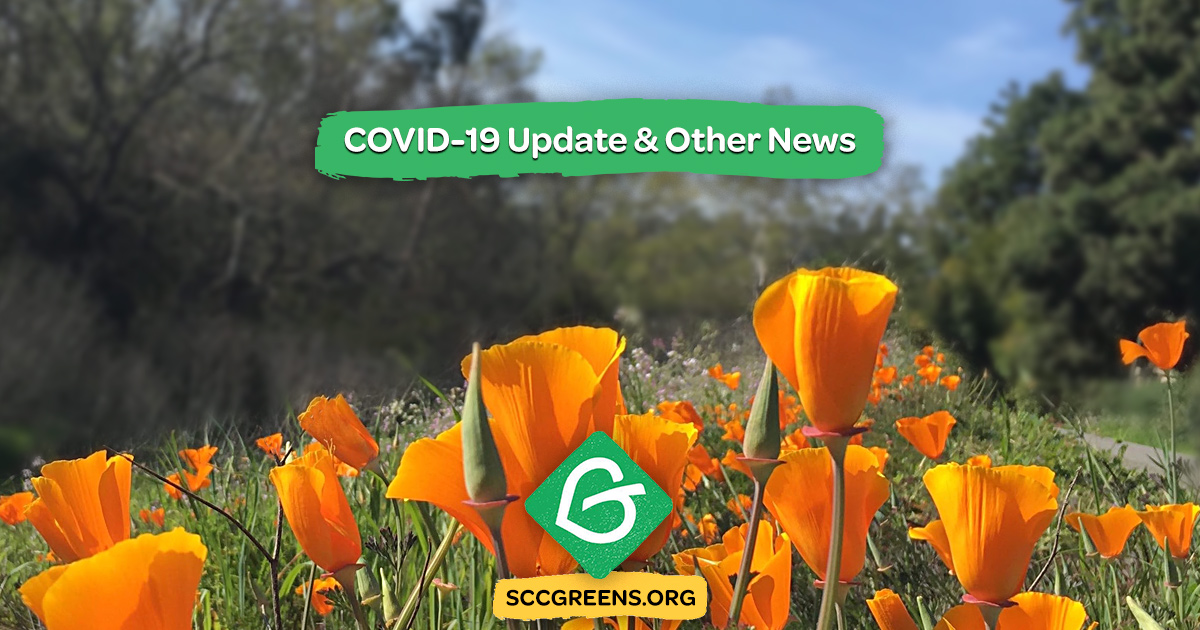 SAN JOSE, Ca – As the number of COVID-19 cases continue to rise in California and in Santa Clara County, the Green Party of Santa Clara County reminds everyone to observe the shelter-in-place orders that have been extended to May 3rd and avoid close contact with anyone outside your immediate family. Learn more on the CDC website.

Even though we all have to observe strict social distancing we can still practice mutual aid and solidarity, care, and compassion. You may help your neighbors in need through staying in touch by phone or online, providing information, and running errands for them when necessary (see precautions and resources below). 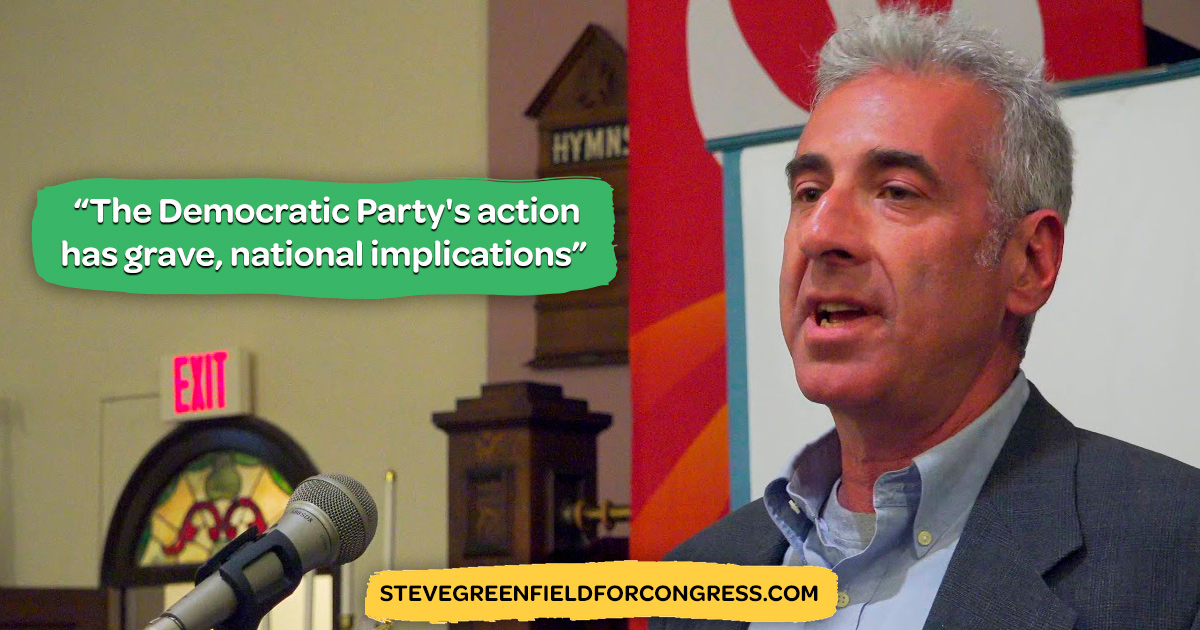 New Paltz, NY – Steve Greenfield, Green Party of New York candidate for Congress in New York's 19th District, was served with legal papers this afternoon by the Democratic National Committee (DNC), by way of its official counsel Perkins, Coie LLC, headquartered in Washington, DC, that name The New York State Board of Elections (BOE), along with Mr. Greenfield, as respondents in an unprecedented attempt by the DNC to have a court prohibit the BOE from continuing with its lawful function of examining the Democratic Party's challenges to signatures on Mr. Greenfield's nominating petition The court filing seeks an injunction prohibiting the BOE from fulfilling its obligation to examine and rule upon the challenge, and to pre-emptively bar Mr. Greenfield from the ballot. 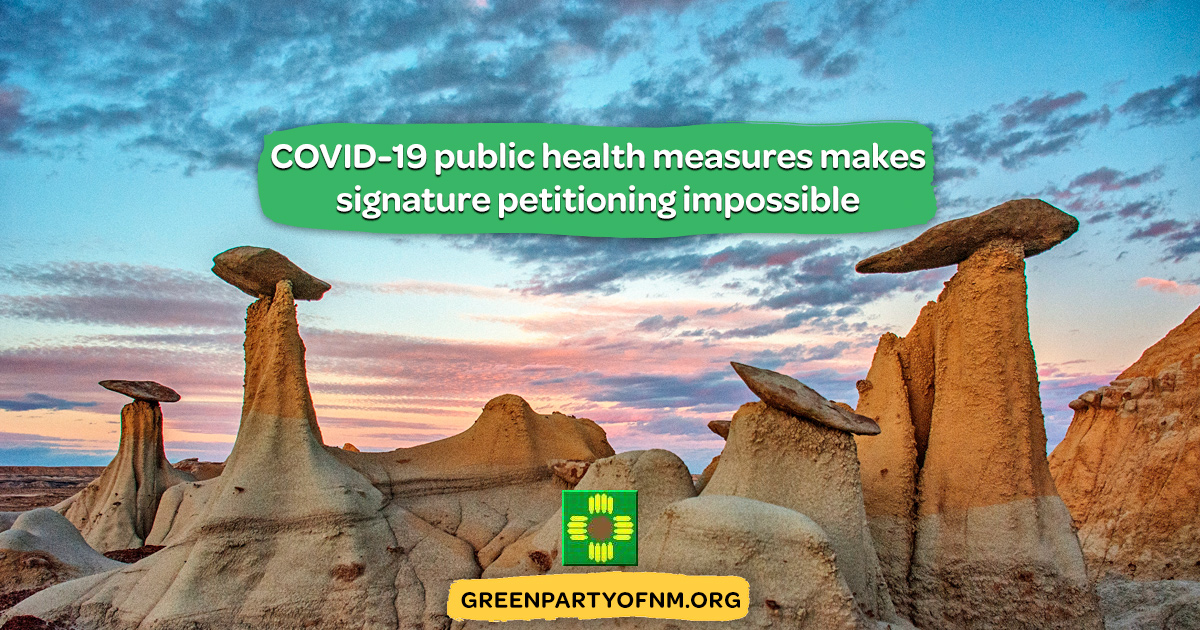 ALBUQUERQUE, NM – Governor Lujan Grisham issued Executive Order 2020-004 on March 11, 2020, as a timely response to the COVID-19 pandemic. The resulting series of Public Health Emergency orders increasingly restricted public gatherings and interpersonal contact. The stay-at-home order was recently extended through April with the expectation that measures would be in place at least through the middle of May.

SOLON, Me – Today Lisa Savage, independent Green candidate for US Senate, delivered a petition to Maine Governor Janet Mills and leadership of the Maine State Legislature, calling for them to immediately close Bath Iron Works in light of the COVID-19 outbreak:

"As the COVID-19 outbreak spreads through Maine -- with 376 confirmed cases as of this writing and broad understanding that there are as many as 10 times more in the state population -- General Dynamics, the owner of the Bath Iron Works Shipyard, must close the facility immediately," Savage said. "The diagnosis of a worker there on March 22 is a canary in the coal mine. As a state, we would be unwise to ignore that warning. 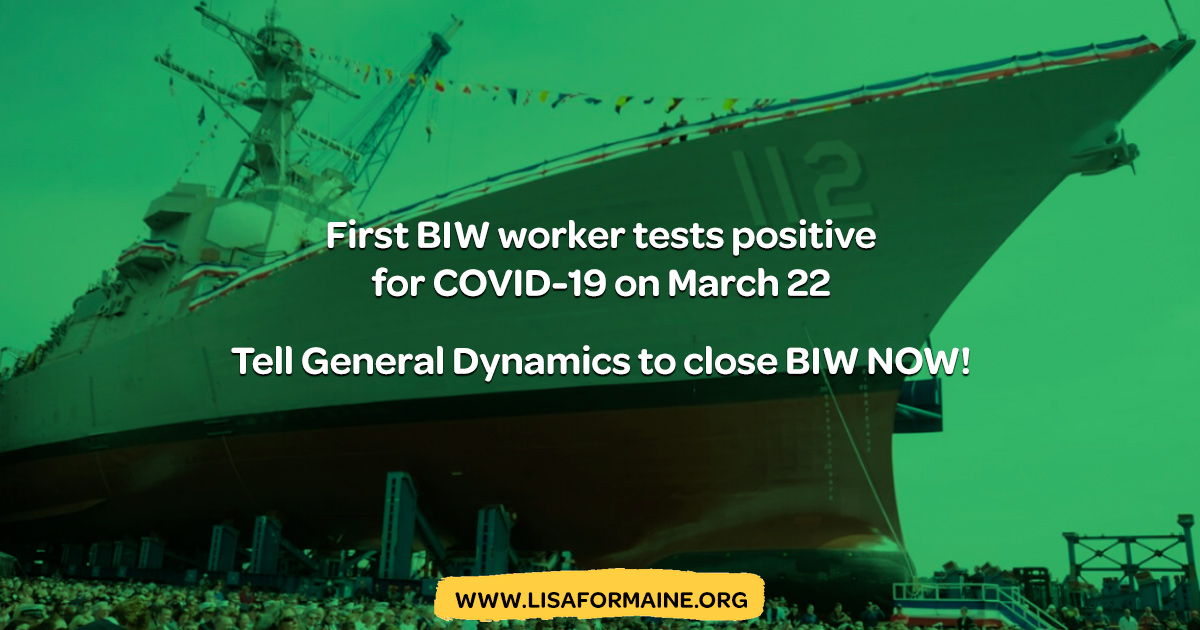 SOLON, Me – Today I sent a petition to our elected officials who have the responsibility and the power to close Bath Iron Works for the public health. Thank you to the 200 people who rallied to sign this petition quickly in the face of a severe pandemic.

Background on why BIW should close and send workers home with pay is in our campaign press release announcing delivery of the petition.