Green Party news and newsmakers in the 2017 election 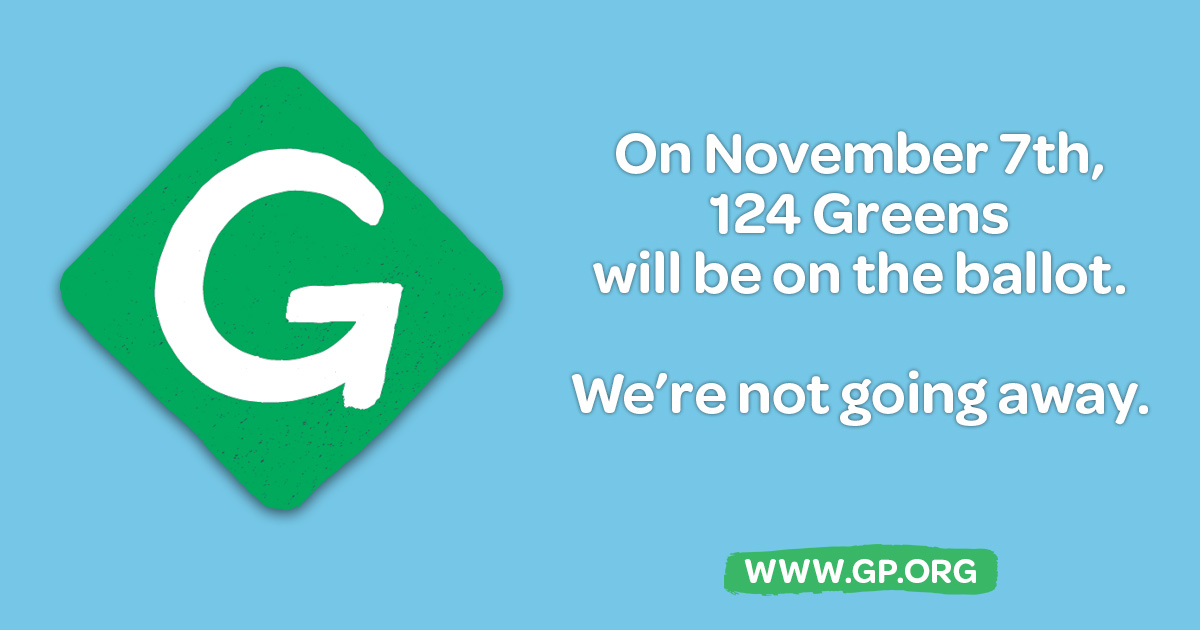 WASHINGTON, D.C. -- Expanded ballot access for alternative parties and endorsements for Green candidates were among the top Green Party stories in the 2017 general election. The Green Party also gained a state legislator in Maine, after he converted from the Democratic Party.

At least 124 Green candidates are on the ballot in the Nov. 7 election. At least 141 Greens currently hold elected office in 18 states.

Green Party news and newsmakers in the 2017 election

Those listed below are a sample of the many stories about Green candidates. For more Green campaign news, visit http://www.gp.org/2017_candidate_news.

Maine: The Maine Green Independent Party protested a vote by the Maine legislature effectively overturning a citizens' referendum that would have enacted Ranked Choice Voting (RCV) in Maine elections. Maine Greens are calling for a "people's veto" of the legislature's bipartisan decision.
http://www.gp.org/maine_greens_call_for_peoples_veto
http://www.mainegreens.org

North Carolina: On Oct. 16 and 17, the North Carolina Senate and House passed SB 656, overriding a governor's veto and expanding ballot access for the Green Party and other alternative parties and allowing voters to register in those parties. Until now, North Carolina has been among states with the most restrictive ballot access laws. The new law will take effect on Jan. 1; Greens will continue to petition until they're certain they'll be on the ballot.
http://www.gp.org/big_win_for_ballot_access
http://ballot-access.org/2017/10/17/north-carolina-ballot-access-bill-enacted-into-law
https://ncgreenparty.nationbuilder.com

Utah: On Sept. 18, the Green Party of Utah received notification from the Lt. Governor's office that the party has met the 2,000 signature threshold to gain ballot access as a political party in Utah and allowing Green candidates to appear on Utah ballots in 2018, and in 2020 if the party can pass a ballot test. Voters will be able to register Green beginning Nov. 30.
http://www.gp.org/ballot_access_in_utah
http://www.greenpartyutah.com

Maine: After unenrolling from the Democratic Party earlier in 2017, Maine State Rep. Ralph Chapman announced in Sept. he has joined the Maine Green Independent Party, becoming the only Green state representative in Maine and the first since John Eder finished his term in 2006.
http://www.gp.org/rep_chapman_joins_maine_green_independents

New Jersey: Rev. Seth Kaper-Dale, the Green Party candidate for Governor of New Jersey, offered sanctuary in his church to an Indonesian couple who may face deportation if they follow orders to report to U.S. immigration officials. Rev. Kaper-Dale, pastor of the Reformed Church of Highland Park, has made rights and protection for undocumented immigrants a priority in his campaign.
http://www.gp.org/indonesian_couple_take_refuge
https://www.kaperdaleforgovernor.com

Pennsylvania: Cheri Honkala continued to press for legal action against election regularities in Philadelphia's 197th District, where she ran for for the State Representative in a March 21 special election. The lawsuit filed by Ms. Honkala, who was the Green Party's vice-presidential nominee in 2012, is based on evidence of illegal voter assistance and electioneering and other questionable poll activities. On Monday, Oct. 30, four members of an election board were charged with intimidating voters, casting false ballots, and falsely certifying the results.
http://www.gp.org/stolen_elections
http://www.gp.org/election_fraud
http://www.philly.com/philly/news/politics/election-fraud-charges-filed-in-197th-district-special-election-20171030.html

Colorado: Democratic Socialists of America has endorsed Julie Bañuelos, candidate for Denver Board of Education.
http://www.banuelos4education.org

New York: Howie Hawkins, candidate for Mayor of Syracuse, New York, held a press conference on Oct. 24 detailing his vision for making Syracuse into a sustainable city. (Jump ahead to 2:40 in the video.)
http://www.gp.org/sustainable_syracuse
http://www.howiehawkins.org

Pennsylvania: Jules Mermelstein, candidate for Judge of the Pennsylvania Superior Court, is interviewed by Christian Banchs of the Green Party of Philadelphia on People Power Lunch Hour
http://www.gp.org/mermelstein_people_power
http://www.mermelstein4judge.org