We spent the last week in Occupied Palestinian Territory, commonly referred to as Israel, where we traveled around the country to visit communities in Jerusalem, Jaffa, Bethlehem, the West Bank, the Nagab, and more.

The controversy over Israel's refusal to allow an official visit by two members of Congress highlights the negative effects of a misguided bipartisan attempt by representatives of both major political parties to attack and smear the boycott, divestment and sanctions (BDS) movement for Palestinian rights and freedom. By an overwhelming margin in July, the House of Representatives passed a nonbinding resolution to condemn the BDS movement and to endorse an Israeli-Palestinian two-state solution. Legislatures in more than two dozen U.S. states have passed measures condemning the BDS movement or banning contracts with businesses involved with it.

The Nakba — the expulsion of the majority native Christians and Muslims from historic Palestine from 1947-1949, a dispossession that continues to this day — is the core of the conflict, not the military occupation. For a sustainable and just peace, Palestinian refugees’ international human right to return to their homes in Israel must be honored. And the only plausible way that can happen is if Israel-Palestine becomes one democratic state with equality before the law, the national homes of two peoples.

The March of Return is a scream for life so that we may leave the walls of our prison. These are the words repeated by Ahmed Abu Artema in his many lectures and interviews. Abu Artema is the brain behind the most powerful expression of unarmed Palestinian resistance, The March of Return, which began on March 30, 2018, and has become a weekly occurrence in the Gaza Strip for close to a year.

"Why would we die here in silence? We want our message to reach the world. We want to say to the world ‘here there is a people. A people searching for a life of dignity, human rights and freedom.'"

I applaud your publishing Michael Galant's excellent (Nov. 18) essay, "Chris Murphy wants a new foreign policy." As Murphy's constituent, so do I.

Still, I couldn't agree more with Galant about Murphy's bellicose attitude toward Palestinians and apparent veneration of a Zionist Israel. Consider a 2015 press release issued on Murphy's becoming a ranking member of the Mideast Subcommittee of the Senate Foreign Relations Committee, in which he says:

In recent weeks, racism against Palestinian people and the expansion of apartheid-Jim Crow policies have escalated. The Israeli lobby and its supporters attacked freedom of speech in the United States, showing how far they will go to prevent the US public from being aware of their behavior.

If more people in the US become aware of the truth about Israel’s genocidal policies, the economic lifeline and political protection of the United States will disappear. Israel could be forced to make significant changes that recognize the human rights and self-determination of Palestinians. 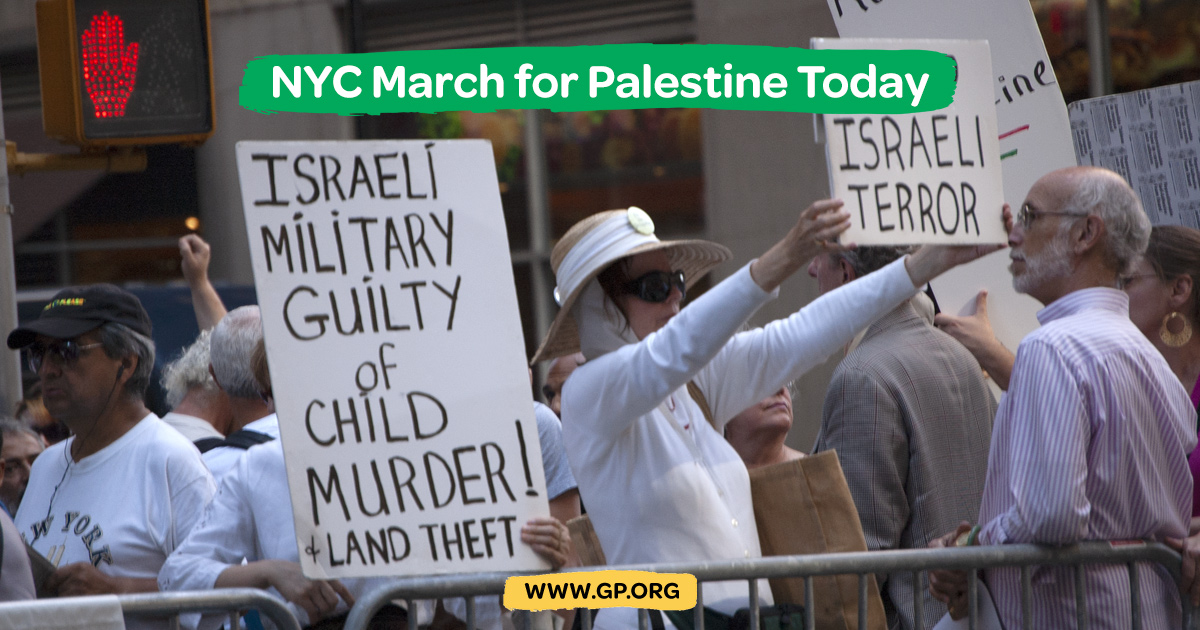 New York City – On Monday, May 14, Israeli forces killed at least 58 Palestinians in Gaza and wounded thousands. Today's march is the response to the near-culmination of the historic #GreatReturnMarch, where for six weeks, tens of thousands of Palestinians — families, children, elders — have been gathering along the fence that keeps 2 million people penned in in an open air prison.

In grief and rage, we will mourn those who have been killed. With respect and inspiration, we will amplify the demands of Palestinians: the right to live in freedom and dignity, and the right to return home.

Read more
Statement of Solidarity For Palestine
May 15, 2018

During riots and uprising in Ferguson in 2014 many activists and crowds protested against the shooting that led to the death of Michael Brown by police. Brown was unarmed. During these protests military styled policing teams fired rubber bullets drenched and bombed people with tear gas. It was then that Palestine showed and expressed global solidarity by tweeting advice as how to survive the attack.

The Green Party of the United States Black Caucus stands with Palestine and condemns Israeli state violence and the use of United States supplied weapons to murder, tear gas unarmed Palestinians. We also recognize that this atrocity could not have occurred without the U.S. Senator Bill Nelson’s tweet of support and celebratory comment outlines that both parties have no problem with ethnic cleansing, genocide, execution, rape, and theft of land.